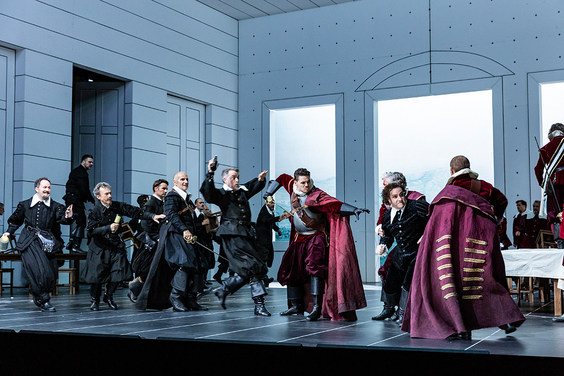 From 16 October 2022, and thus three years after the celebrated Dresden premiere in July 2019, the Semperoper is once again staging its production of »Les Huguenots«. Together with multi-award-winning opera and theatre designer Johannes Leiacker, acclaimed stage director Peter Konwitschny presents a timeless and turbulent social tableau heightened by a truly opulent visual sensuality. Under the baton of John Fiore, who is conducting the piece for the first time, Elena Gorshunova will make her role debut as Marguerite de Valois; she is joined by Dimitris Tiliakos as Le Comte de Nevers and Sergey Romanovsky as Raoul de Nangis, who are also singing these roles for the first time.

Three days before, on 13 October 2022, Mischa Spoliansky’s cabaret revue »Wie werde ich reich und glücklich?« also returns to the Semperoper. Due to the pandemic restrictions, the premiere of the Dresden version of this piece, staged by Manfred Weiß, took place in June 2021 as a summer open-air event at the city’s Weißer Hirsch concert venue. For the performance dates in October 2022, Menna Cazel as Marie and Aaron Pegram as Kibis are now seeking the patent recipe for becoming rich and happy on the stage of Semper Zwei. The conductor is Max Renne.

»Les Huguenots« by Giacomo Meyerbeer
Staged by Peter Konwitschny
On 16, 22, 28 and 31 October 2022 at the Semperoper Dresden.
With Elena Gorshunova, Štĕpánka Pučalková, Jennifer Rowley, Tilmann Rönnebeck, Sergey Romanovsky and Dimitris Tiliakos.
The Staatskapelle Dresden will be conducted by John Fiore.
The production features the State Opera Chorus and the Children’s Choir of the Semperoper Dresden. Generously supported by the Semperoper Foundation

»Wie werde ich reich und glücklich?« by Mischa Spoliansky
Staged by Manfred Weiß
In Semper Zwei from 13 October 2022, with several evening performances until the end of the month.
With Menna Cazel and Aaron Pegram.
Performed by the project orchestra under the baton of Max Renne.

Requests for a press ticket (indicating the medium and expected publication date) should be sent to press@semperoper.de