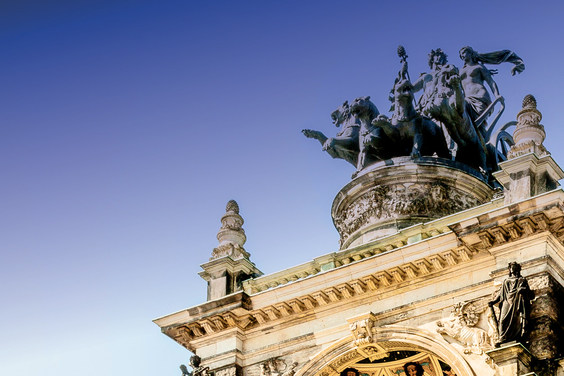 Dresden, 15 September 2020. Under the emphatic title »We will dance!«, Semperoper Ballett welcomes back fans to Dresden’s opera house on 18 September 2020 following its pandemic-related absence from the stage. As part of the »Semper Essenz« series of events, the company will revisit some outstanding classical and contemporary choreographies from its extensive repertoire of the last 15 years, during which time it has ascended to the top rank of the dance world.

The gala programme will feature excerpts from choreographies by Aaron S. Watkin as well as the work of great figures of past and present such as Marius Petipa, Hans van Manen, William Forsythe, Alexander Ekman, Jiří Kylián, David Dawson, Michel Fokine, Joseph Hernandez and Nicholas Palmquist. Now celebrating his 15th anniversary as ballet director at the Semperoper, Aaron S. Watkin is delighted to present two world premieres: Palmquist’s »These Arms« and Hernandez’s »A List of Beginnings«.

The eight performances of »Semper Essenz: We will dance!« scheduled for September and October will feature all of the company’s dancers, including prominent new arrivals at Semperoper Ballett: From the 2020/21 season, the internationally renowned French ballerina Sofiane Sylve and Brazilian ballet star Marcelo Gomes are joining the team of ballet masters while Italy’s Carlo Di Lanno has been appointed principal dancer.

Confirming his long working relationship and commitment to Semperoper Ballett, choreographer David Dawson has agreed to assume the position of »Associate choreographer« from this season. Together with company dancers of the Semperoper Ballett, Dawson developed an online collection of dance short film works over the lockdown in order to express solidarity with artists affected by the coronavirus restrictions. The films will premiere on 17 September 2020 (one day before the Semperoper Ballett Gala). Further information on the project »7 Portraits of Solitude« can be found at daviddawson.com.

Works by:
David Dawson: »On the Nature of Daylight«
Nicholas Palmquist: »These Arms« (premiere)
Michel Fokine: »The Dying Swan«
Joseph Hernandez: »A List of Beginnings« (premiere)

The Staatskapelle Dresden will perform under conductor Tom Seligman.

Please note that only a limited number of press tickets are available for these performances. Accompanying tickets may be purchased at the full price. Please direct your request for a press ticket (indicating the editorial assignment) as well as any other press enquiries and interview requests to presse@semperoper.de.