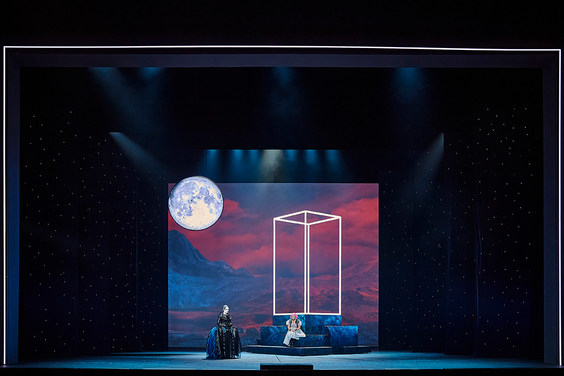 Dresden, 26 March 2021. The successful premiere of Wolfgang Amadeus Mozart’s »The Magic Flute« on 1 November 2020 was in fact the last performance in the current Semperoper season to be enjoyed by a live audience at the opera house. From 5 April 2021, Josef E. Köpplinger’s imaginative production will be streamed throughout Europe on semperoper.de and at ARTE Concert on arte.tv/opera.

The recording will feature a star-studded roster of singers including René Pape, Klaus Florian Vogt and Nikola Hillebrand (who made her role debut as the Queen of the Night at the premiere performance), conducted by Christoph Gedschold from the rostrum of the Dresden Staatskapelle. In his production for the Semperoper, Josef E. Köpplinger, stage director and head of Munich’s Gärtnerplatztheater, interprets the elaborate Singspiel as a coming-of-age story. Heightened by the visionary and dreamlike images of set designer Walter Vogelweider, viewers can enjoy a psychologically driven story of intergenerational change which leaves ample room for the fairy-tale magic of Mozart’s opera. The project has been made possible by the extraordinary support of the Semperoper Foundation. ARMIDA FILM GmbH Leipzig will film the production, intended as a contribution to the European opera season »Saison ARTE Opera«, on behalf of the Semperoper Dresden.

In view of the necessary restrictions to deal with the ongoing pandemic, the Saxon State Ministry for Science, Culture and Tourism expressly welcomes this streaming event. In close consultation with the Saxon State Theatres, the Ministry reserves the right to make further decisions on possible performances with a live audience from mid-April. Manager director Peter Theiler: »Although we at the Semperoper, along with everyone else from Dresden’s cultural scene and our audiences, had been looking forward to and preparing for the opening of our venues as soon as possible, the ministerial decision to ban any performances in front of a live audience is understandable in view of the surging infection rates.« He goes on: »But we are not giving up hope that we can welcome back our audiences to their opera house as soon as possible, kickstarting the resumption of performances for the remainder of the season with a replacement schedule that complies with all necessary hygiene measures.«

Peter Theiler points out that this recording also demonstrates the Semperoper’s ongoing commitment and willingness to work with its artists to realise its ambitions as energetically as possible despite the restrictions imposed by Covid-19. Complementing the Semperoper’s other online activities, the opera streaming announced for Easter sends a message via all available media formats that »we are ready to offer our audience a brilliant cultural programme of undiminished artistic quality«. A detailed statement by Peter Theiler, managing director of Saxon State Opera, on the Semperoper’s current plans can be found on the Semperoper website.

Wolfgang Amadeus Mozart »The Magic Flute«
Grand opera in two acts based on the libretto by Johann Emanuel Schikaneder and here staged by Josef E. Köpplinger.
The production was designed to accommodate current hygiene and spacing rules.

The Dresden Staatskapelle will be conducted by Christoph Gedschold.

Free streaming from 3 p.m. on Easter Monday, 5 April 2021, via semperoper.de and arte.tv/opera (German language version).
A production of ARMIDA FILM GmbH on behalf of the Semperoper Dresden as part of the ARTE Opera network.
This event is made possible by the kind support of the Semperoper Foundation (Stiftung Semperoper – Förderstiftung).