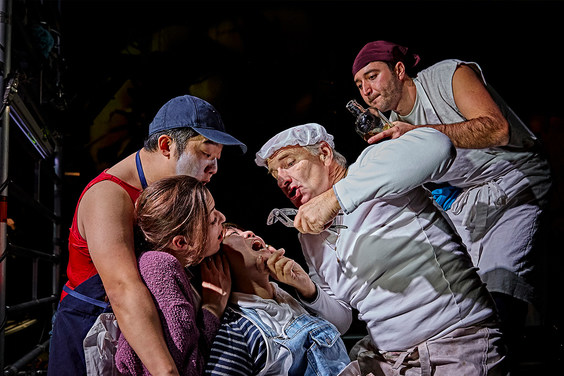 After a break of almost two and a half years, Peter Eötvös’s music-theatre piece »Der goldene Drache« (»The Golden Dragon«) can be enjoyed again in Dresden from 22 June 2022. Under the baton of Marie Jacquot, this production staged by Czech director Barbora Horáková is returning with practically the entire cast of the original Dresden premiere, namely Karina Repova, Mariya Taniguchi, Doğukan Kuran as well as James Park and Ralf Rachbauer.

With this production in our Semper Zwei venue, Marie Jacquot, currently Kapellmeister at Deutsche Oper am Rhein and designated chief conductor of the Royal Danish Theatre Copenhagen for the 2024/25 season, will make her debut at the Semperoper. In addition to her musical interpretation of Peter Eötvös’s piece, the French conductor will also appear on the rostrum of the Dresden Staatskapelle for the performances of »Carmen« on 26 June and 15 July 2022.

Co-produced with the Teatro Arriaga Bilbao, »Der goldene Drache« celebrated its Dresden premiere during the Semperoper’s 2019/20 season. Unfortunately, subsequent performances were cancelled due to the lockdown restrictions. The libretto was written by one of the most successful German-language playwrights of our time, Roland Schimmelpfennig, based on his play of the same name. The score was created by the Hungarian composer and conductor Peter Eötvös, whose oeuvre features several operas and orchestral works that bridge the gap between Eastern European folk traditions and contemporary classical music.