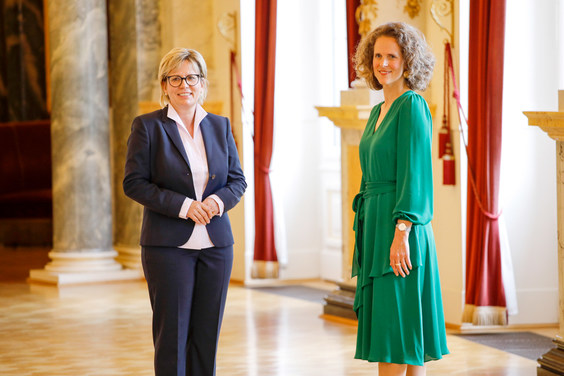 Nora Schmid is to be the new artistic director of the Semperoper Dresden from the 2024/25 season, with her contract running until 2030. She will succeed Peter Theiler, who remains in charge of the Semperoper until the end of the 2023/24 season.

Nora Schmid is no stranger to Dresden or the Semperoper: from the 2010/11 season, she was head dramaturge at the Saxon State Opera and, from 2012, also personal assistant to then artistic director, Dr Ulrike Hessler. From July 2012, she was part of the interim directorship. In the 2015/16 season, Nora Schmid became managing director of Graz Opera, the second largest opera house in Austria. In only her second season, Graz Opera was nominated as the best opera company at the International Opera Awards. In addition, several of the company’s music theatre productions and CD recordings received prizes. Alongside her jury work for various international singing competitions and the Ring Award, Nora Schmid was elected to the board of directors of Opera Europa in 2018.
Initially approached by the Saxon Ministry of Culture, Nora Schmid was interviewed by a selection panel appointed by the board of trustees. She was unanimously chosen by both the panel and the board.

The board of trustees also approved the extension of Wolfgang Rothe’s contract as managing director of Saxon State Theatres. He will continue to work for the Semperoper in this capacity from 2024 to 2028 and, together with Nora Schmid, will run the opera house.

At a joint press conference, the Saxon government introduced the 42-year-old as the Semperoper’s new artistic director. Saxony’s Minister for Culture and Tourism, Barbara Klepsch, expressed delight that Nora Schmid is returning to Dresden as artistic director for the next generation of Semperoper audiences. According to Klepsch: »We were persuaded by Nora Schmid’s intimate connection and commitment to the Semperoper, whose outstanding position and tradition she will continue to shape in exciting ways over the coming years. Her focus on artistic excellence, her enthusiasm for the opera house as a socially relevant institution, as well as her strong communication skills and a modern style of leadership, make Nora Schmid a distinctive, compelling and much sought-after artistic director. I thank her for choosing Dresden, and we are happy to entrust her with responsibility for the Semperoper Dresden, home of the Staatskapelle, the Semperoper Ballett and the State Opera Chorus as well as the company soloists and many international guests, from 2024.«

Nora Schmid was equally delighted with her appointment: »I’m thrilled to be returning to the Semperoper. Music and theatre are highly communicative art forms, and I hope that people’s experiences in the Semperoper will provoke interest and discussion. In the coming years I would like to develop a programme that reflects and continues the exciting and colourful history of Dresden and this opera house; at the same time, I want to captivate audiences with new, forgotten or rarely performed works while not shying away from the familiar and the popular. A certain knowledge and cultivation of tradition are prerequisites for daring to try something new. Together these elements not only bring intellectual stimulation but also diverse perspectives as well as theatrical magic and power. Music is always at the heart of my work – as is a feeling of solidarity with all those who contribute day after day to burnishing the great reputation of the Semperoper in music and dance. Underpinning this artistic brilliance are the outstanding State Opera Chorus, the Semperoper Ballett, which enjoys great success both here and on tour, as well as a superb company of soloists, charismatic guest artists and, of course, the Staatskapelle Dresden. It’s a real privilege to be able to experience this unparalleled orchestra night after night in the Semperoper at opera and ballet performances as well as in their own concert series or as cultural ambassadors of Saxony on international tours. Supported by all these artists, I’m looking forward to the wonderful yet complex task of ensuring that the Semperoper appeals to our hugely diverse local audiences while also delighting opera fans from all over the world!«