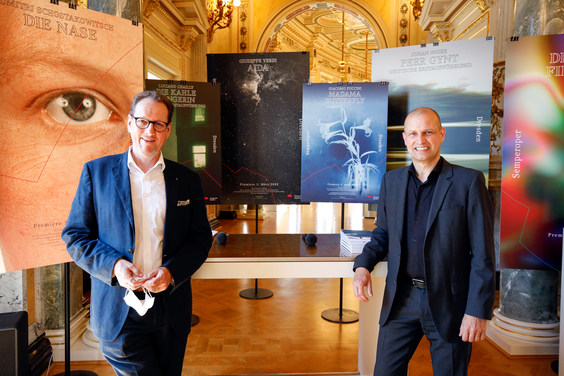 The new season will feature an extraordinary number of 15 new and 22 returning productions spread over 351 performances in opera, ballet and the programme of the Junge Szene. These will include three world premieres, one German premiere and two Dresden premieres.

The opening months of the season will feature Peter Konwitschny’s production of »Norma«, Vera Nemirova’s production of »Don Carlo« – including the world premiere of Manfred Trojahn’s newly composed prologue (commissioned by the Semperoper) – and the new production of »La Cenerentola« staged by Damiano Michieletto. This will be followed in 2022 by another Semperoper commission: the opera »Die andere Frau« by Torsten Rasch. Guests can look forward to a visually stunning production by stage director Immo Karaman in collaboration with the Hungarian 3D artist and pioneer of projection mapping, László Zsolt Bordos.

Principal conductor Christian Thielemann will ascend the Staatskapelle rostrum to direct the fantastic Krassimira Stoyanova in the title role of Verdi’s »Aida«, staged by Katharina Thalbach. This will be followed by Puccini’s »Madama Butterfly«, featuring Kristine Opolais as Cio-Cio-San and Christa Mayer as Suzuki under the baton of Omer Meir Wellber. Fashion designer Kenzō created the costumes for Amon Miyamoto’s new staging of »Madama Butterfly«.

The cycle of operatic premieres scheduled for 2021/22 will be completed by two Slavic operas: Antonín Dvořák’s »Rusalka« and »The Nose« by Dmitri Shostakovich. Christof Loy will stage Dvořák’s lyrical fairy tale, Joana Mallwitz will conduct the Staatskapelle at these performances. Audiences can enjoy a second Konwitschny production near the end of the 2021/2021 season when Shostakovich’s earliest opera »The Nose« is heard for the first time on the Semperoper stage.

After the foretastes in June 2021, the six-part ballet evening »A Collection of Short Stories« featuring choreographies by Aaron S. Watkin, David Dawson, Jorma Elo, William Forsythe and a world premiere by Nicholas Palmquist will celebrate its official premiere in October 2021. It also provides a retrospective on the company’s amazing development under the 15-year directorship of Aaron S. Watkin. For its second ballet premiere of the 2021/22 season, the Semperoper Ballett enjoys the rare distinction of being only the second company in the world to perform choreographer Johan Inger’s »Peer Gynt«, created for Basel Ballet in 2017.

Fans of Semper Zwei and the Junge Szene will be treated to Luciano Chailly’s »The Bald Soprano« staged by Barbora Horáková, the Dresden premiere of »Blues Brothers« staged by Semper Zwei’s Artistic Director, Manfred Weiß, as well as Stephen Sondheim’s celebrated »Into the Woods«.

And in May 2022 comes the premiere of the opera »Weiße Rose«, in which Dresden composer Udo Zimmermann remembers the final hours of the famous Scholl siblings, who were executed by the Nazis. The opera is staged by Stephan Grögler. The composer and visual artist Zad Moultaka created the play »Three lousy nasty guys« for Semper Zwei’s youngest visitors, here staged by Annika Nitsch.

The advance booking for all other events will be announced in September 2021. Further information on subscriptions and packages, designed for 2022, will be published in autumn 2021.