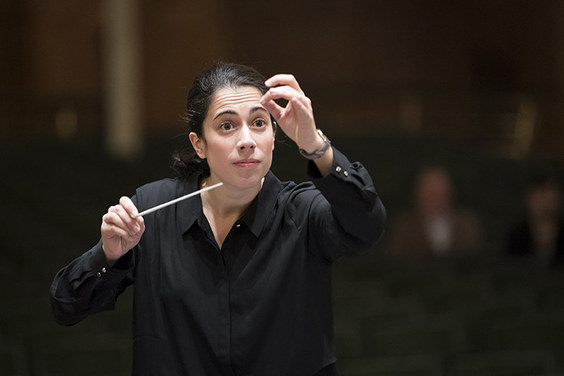 In June and July, Marie Jacquot – currently Kapellmeister at the Deutsche Oper am Rhein and the designated chief conductor of the renowned Royal Danish Theatre Copenhagen from 2024/25 – will appear for the first time at the Semperoper when she directs the returning production of Peter Eötvös’s »Der goldene Drache« in Semper Zwei as well as two performances of »Carmen« in the Semperoper. In November 2022, Marie Jacquot is once again a guest in Dresden when she conducts the Staatskapelle at the traditional ZDF Advent Concert in the Frauenkirche.

Marie Jacquot will become chief conductor of the renowned Royal Danish Theatre in Copenhagen from the 2024/25 season. She has been Kapellmeister at the Deutsche Oper am Rhein since the 2019/20 season. In 2019 she was the first female conductor to be awarded the »Ernst von Schuch Conducting Award« by the Ernst von Schuch Foundation in Dresden. In their statement, the jury noted that »thanks to her boundless musical charisma, she immediately shapes the orchestra into a unified body of sound, which under her direction creates a gripping work of music that both captivates and engages the listener«. After assisting Kirill Petrenko in the world premiere of »South Pole«, she was invited by the Bavarian State Opera to conduct two world premieres (»Tonguecat«, »Die Vorübergehenden«) as part of the Munich Opera Festival. The French maestra studied trombone at the Paris Conservatory before training in conducting at Vienna’s University of Music and Performing Arts.