The high-society Parisian courtesan Violetta Valéry laughs off her mortal illness as she plays the hostess of glittering parties. Weakness means loneliness, which Violetta fears more than anything else. Then her heart is conquered by Alfredo, and she discovers the meaning of true love. The couple decide to start a new life together in the country. But Alfredo’s family, viewing Violetta as wholly unsuitable, demands their separation. She acquiesces and leaves Alfredo without an explanation. Later, Alfredo publicly humiliates Violetta at a ball. When he comes to realizes his mistake, it is too late: He finds his lover at death’s door. Giuseppe Verdi’s opera about a »fallen woman«, which premiered in 1853, triggered fierce protests when it was first performed due to its frank portrayal of prostitution. Director Andreas Homoki brings the story bang up to date, depicting a society drowning in luxury and excess, at whose heart we find the »It Girl« Violetta.

Act 1
The young Violetta Valery is the radiant focus of society.  The young Alfredo Germont is presented to her at a party.  He has secretly admired her for some time.  Everybody takes to the dance floor but Violetta suddenly feels faint and remains behind.  Alfred seizes the opportunity to declare his love for her.  His openness moves Violetta and she arranges to meet him the next day.  Left alone, she feels torn between her glamorous but ultimately empty existence and the hope of starting a new life with Alfredo.

Act 2
Scene 1
Violetta has retired to the country to live with Alfredo, leaving the city and her former life behind her.  He learns by chance that Violetta is about to sell all her property to finance their life together.  He sets out to raise the money they need himself. While Alfredo is away, his father Giorgio Germont calls.  He appeals to Violetta to break off this scandalous relationship with Alfredo since it is endangering the forthcoming marriage of his daughter.  Violetta initially waves him away but finally agrees out of compassion for the young bride when Germont tells her that their relationship is doomed in any case because of her past life.  She sees no alternative but to return to her former way of life. When Alfredo arrives and Violetta takes her leave of him, he has no idea that this is for ever.  Shortly afterwards, he receives a farewell letter.  Germont appears and tries in vain to persuade his despairing son to return home.  Alfredo notices an invitation to a party from Violetta’s friend Flora and dashes off.
Scene 2
Alfredo arrives at Flora’s party and realises that Violetta has gone back to her former lover, Baron Douphol.  He wins at cards and challenges the Baron.  When he wins again, he confronts the Baron. While the guests are dining, Violetta tries in vain to persuade Alfredo to leave the party, without telling him the real reason for her behaviour.  Raging with jealousy, Alfredo calls for the guests to act as witnesses and uses the money to humiliate Violetta as public »payment« for the time they had spent together.

Act 3
Seriously ill, and abandoned by everyone, Violetta is waiting for Alfredo, who is living abroad but has meanwhile been told the true reasons for her behaviour by his father.  When he arrives, they both dream one last time about the happiness of their love.  Then her strength deserts her, and Violetta dies. 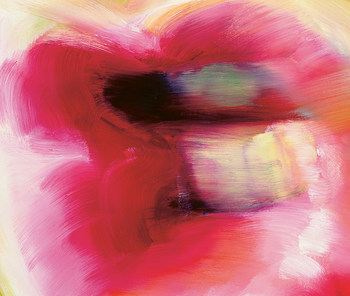 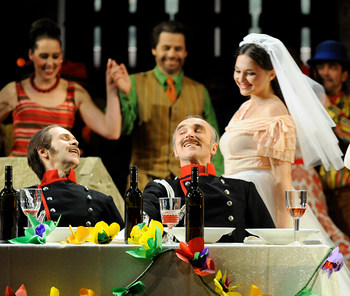