Please note our performances of »Weiße Rose« in the revised programme.

On 18 February 1943, siblings Hans and Sophie Scholl are picked up and arrested while distributing leaflets at Munich University. Their writings, produced within the student group »White Rose«, are an act of rebellion against the Nazi authorities and an attempt to rouse people around them to support the resistance movement. In flashbacks and dreamlike images, Udo Zimmermann’s chamber opera »Weiße Rose« tells of the last hours of Hans and Sophie Scholl, focusing on their private fate as well as the hopes and fears of the two young people. Born and raised in Dresden, Udo Zimmermann is one of the most well-known of contemporary European composers. The inspiration for this work, which premiered at the Hamburg State Opera in 1986, was Zimmermann’s own full-scale opera »Die weiße Rose«, completed in 1967. The later work is now one of the most frequently performed chamber operas in Germany. 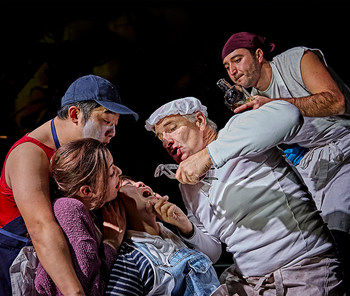