It is a game of life and death, initiated by the coldly distant Princess Turandot: Each suitor must solve three riddles. Failure means death; and no prince has so far succeeded in winning her hand. But Prince Calaf, a stranger in Turandot’s realm, is willing to risk everything. When he solves the riddles and demands his »prize«, he discovers a frightened woman who refuses to give herself to the stranger. And now, it is the princess who undergoes torment: In order to retain her freedom, she must discover the prince’s true name. Giacomo Puccini’s last opera, which remained unfinished, was premiered as a fragment in 1926. This is a multi-layered work of great emotional impact and daring instrumentation, unique in its use of exotic melodies borrowed from traditional Chinese folk music. The French director Marie-Eve Signeyrole, who has been nominated for the FAUST Prize, will make her debut at the Semperoper with this production of Puccini’s operatic thriller.

Act One
A Mandarin reads out to the people the law that has been in force for years: Princess Turandot will marry the first princely suitor who can successfully answer three riddles. If he is unable to do so, he will be beheaded. On the same day, the unsuccessful Prince of Persia, the last contender thus far for the hand of the Princess, is led to the scaffold. The people, thirsting for blood, impatiently await the spectacle. But the mood shifts when they realize the prince’s youth,  and they beg the Princess for mercy – in vain. Hidden in the crowd of onlookers is Timur, a Tartar king who has been driven out of his empire and is now a fugitive. He is accompanied only by the slave Liù. When the unruly crowd threatens to trample them, a stranger approaches and supports the old man. He reveals himself to be Calaf, Timur's long-lost son. While fleeing from his country’s conquerors, he and his father were separated. Liù also immediately recognizes the Prince, who once smiled at her and whom she has loved ever since. Turandot appears and gives the signal for the execution. Calaf is about to curse her for her cruelty, but instead falls in love with her at first sight. Despite warnings from his father and Liù, and even from the ministers Ping, Pang, and Pong, the Prince, against all better wisdom, wants to be the next contender for Turandot’s hand. He rushes to the large gong in the palace and rings it three times to signal his readiness.

Act Two
Ping, Pang, and Pong reflect on the glorious history of China from its origins to the present, which they believe is doomed by Princess Turandot’s cruelty. Everyone is tired of the endless executions and blood. The three civil servants dream for a moment of a carefree life on their rural estates, from which they are kept away by their duties at court. In the palace, they have to prepare the riddle ceremony for the unknown prince and his likely execution. The people eagerly await the riddles of Turandot and the answers of the unknown prince. Turandot reveals the reason for her cruel behavior: her ancestor, Princess Lou-Ling, was once robbed and raped by Tartars. On her behalf, Turandot now takes revenge on all men and vows never to wed. She poses her riddles to the unknown prince, who, to everyone’s great surprise, is able to solve them. Turandot then turns to her father in horror and begs him not to hand her over to the stranger. However, the Emperor decrees that he must keep his word. But Calaf offers Turandot a way out. He, the unknown prince, will release her from the oath and choose suicide if she is able to find out his name by sunrise. Then his life will be at her disposal. If not, she will be his wife. The Emperor agrees.

Act Three
The Princess has decreed that nobody is to sleep that night until the name of the stranger has been found out. The three ministers beset the Prince, offering him gold, fame, and women to dissuade him from Turandot. But Calaf is confident of victory. Timur and Liù, who were seen talking with Calaf earlier, are dragged in by soldiers. To protect Timur, Liù claims that only she knows the stranger's name, but that even under threat of torture she will not divulge it. Turandot is impressed by Liù's self-sacrifice. However, the latter assures the Princess that she, too, will soon find out what it means to love the Prince. For her, the most beautiful proof of love is to die for him. Liù steals a dagger from a soldier and stabs herself. The people are all horrified and withdraw in mourning. Calaf and Turandot remain behind, alone. The Prince reproaches Turandot for her cruelty. He tears the veil from her face and kisses her passionately. The Princess gives up her resistance and admits that she feared and loved him from the very beginning. Calaf reveals his name to her, thereby placing his life in her hands. When they appear before the Emperor, Turandot proclaims his name: not Calaf – his name is love. To the jubilation of the people, Calaf throws himself into Turandot’s arms. 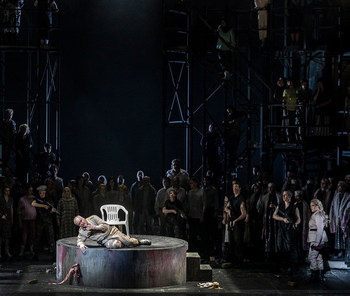