In his opera based on the biblical story of Abraham and Sarah, composer Torsten Rasch has created an exciting tale of a »ménage à trois« which at the same time deals with the emergence of the three great world religions. Abraham fathers a child with the maid Hagar when his wife Sarah does not bear him any offspring. However, after Sarah unexpectedly gives birth to Isaac, she kicks Hagar out. The story of the prophet Abraham relates the common origins of the three world religions: Christianity and Judaism trace their roots to Abraham and his son Isaac, while his second son Ishmael, whom he conceived with Hagar, is a great prophet in the Islamic tradition. Born in Dresden in 1964, Torsten Rasch is a highly versatile composer, having written not only operas and orchestral pieces but also film scores. »Die andere Frau« (»The Other Wife«) was commissioned by the Semperoper Dresden. In this production by Immo Karaman, the three main characters are joined by the Iranian singer Sussan Deyhim, while the audience have a close-up view of the proceedings from their seats directly on the Semperoper stage.

Abram and his wife Sarai are on the run from war and famine. Having found refuge in Egypt, Sarai had to pose as Abram’s sister in order to protect him. But he did not protect her from the Egyptian men. Now she cannot have any children. Sarai is embittered, but Abram continues to trust God, who has promised him a blessed future in the »promised land« of Canaan. Since Sarai knows that for this future Abram will have to establish a dynasty, she suggests that he have a child with the young slave girl Hagar and raise the child as his heir. Abram, proud of his manliness and imbued with the idea of being one of God’s chosen, commands Hagar to give herself to him and bear his child. But out of jealousy, Sarai soon regrets her plan. Her jealousy grows when Hagar becomes pregnant. Hagar fears for her life and flees into the desert. But there an angel appears to her who persuades her to stay and announces that the name of her son will be Ishmael. Sarai sees her position as Abram’s wife increasingly called into question and refuses to recognize the child. She wants to drive away the concubine Hagar as soon as she has fulfilled her task as a surrogate mother. When Abram receives news of the destruction of the cities of Sodom and Gomorrah, Sarai reacts callously and without empathy. Three mysterious guests appear – in reality three angels – who prophesy that Sarai will have a son after all, whose name will be Isaac. Sarai triumphs over Hagar, who points out in vain that Ishmael is Abram's firstborn son. She asks Abram to kill Hagar in order to end the competition between the two women and the two sons. But Abram refuses to commit murder and submits to the will of God. Allegedly to protect her, he grants Hagar her freedom and tells her to flee as quickly as possible. Hagar sees through Abram's cowardly decision and moves with her son into the desert. The three angels prophesy that both sons will survive and become founding figures of two world religions.

Die andere Frau / The Other Wife 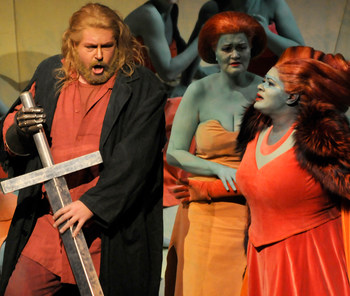