Following the rescue of Sieglinde and the death of Siegmund, as told in »Die Walküre«, their son Siegfried grows up at the edge of the world with Mime, the brother of Alberich. The dwarf hopes that Siegfried will obtain for him the powerful ring in battle. But the ignorant Siegfried turns against his »father«: After he has killed the giant Fafner and taken the ring, he also murders Mime. Led by a woodbird, he awakens the sleeping Brünnhilde. Now the two have the power to save Wotan’s world of the gods – but love is stronger than political rationality. »Siegfried« is the most visually dramatic part of Wagner’s »Ring of the Nibelung« cycle, inspiring director Willy Decker to create a »theatre within a theatre« for his Dresden production. However, it is unclear who is taking the role of the observer and who is being observed – until the drama detaches itself completely from the stage and seems to advance towards the audience.

First scene
Mime, brother of Alberich, is forging a sword in vain. No sword has been strong enough until now for the tremendous power of young Siegfried whom Mime took from his dying mother long ago and brought up. He hopes to gain the Ring for himself through Siegfried. The Ring is guarded by the giant Fafner who has changed into a dragon. The more Mime strives to gain Siegfried's filial love, the more he is despised. Finally, he is forced to disclose to Siegfried the secret of his birth. As proof, he shows him the shattered sword Nothung which Siegfried's mother Sieglinde had left her son as sole inheritance before she died. Siegfried asks Mime to weld the sword together and goes out into the woods. But Mime's skill fails.  Wotan, disguised as a Wanderer, enters and challenges Mime to a wager. Mime loses and is therefore at the Wanderer's mercy. He reveals that Mime will die at the hands of whoever can forge the sword Nothung and fears nothing.   When he returns, Siegfried forges the sword together, while Mime brews a poison which he wants to use on Siegfried after his fight with the dragon. The treasure would then fall into Mime's hands.

Second scene
Alberich is waiting in front of Fafner's cave for whoever is going to slay the dragon and acquire the Ring. Wotan, who Claims no further interest in the Ring and becoming master of the world, tells Alberich that Siegfried and Mime are approaching. Wotan wakes the dragon to negotiate the handing over of the Ring. In vain. Siegfried kills Fafner with the sword Nothung. A drop of the dragon's blood gives him the ability to understand the language of the birds. A woodland bird tells him to fetch only the Ring and Tarnhelm from the cave and warns him of Mime's intention to murder him. Siegfried kills the dwarf. Guided by the woodland bird, Siegfried sets out for the fire-girt Valkyrie rock where Brünnhilde is asleep.

Third scene
To no avail, Wotan has called Erda from the deep to ask for her advice. She refuses to answer. Siegfried meets the Wanderer who tries to bar his path to the Valkyrie rock but the young hero recognises him as his father's enemy and shatters the spear of the god.  Siegfried makes his way through the ring of fire which is blazing around Brünnhilde. He meets a woman for the first time and comes to know the sense of fear. Brünnhilde awakes, her first greeting is to the sun and her rescuer. She forgets the evil of the gods and the world in Siegfried's embrace. Rejoicing, Brünnhilde and Siegfried avow their love. 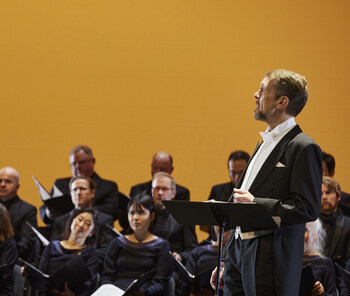