Jean-Philippe Rameau’s ballet-opera »Platée« is one of the most unusual works of musical theatre from the 18th century. First performed in 1745, the comedy tells the story of the nymph Platée, who believes that every man is destined to fall in love with her immediately. Platée’s thirst for love is exploited by Jupiter, the king of the gods: To convince his own wife Juno of his fidelity, he stages an absurd wedding with the nymph from the marsh. In »Platée«, Rameau parodies the traditions of French baroque opera while at the same time presenting the courtly society of his time as an assortment of unscrupulous opportunists. Featuring some highly evocative passages, intoxicating dances and unusual musical effects, this is one of the composer’s greatest works. Newly staged by star tenor Rolando Villazón, Dresden audiences have their first opportunity to enjoy »Platée«. The French baroque ensemble »Les Arts Florissants« is conducted by Paul Agnew, who himself has sung the role of Platée on numerous occasions.

Prologue
The plot is set in a place where the gods - Jupiter with his jealous wife, Junon, and his messenger, Mercure – are the top of the hierarchy. Under them are the demigods, satyrs, and nymphs. Cithéron ensures that everyone is having fun with lots of wine. Thespis, who had fallen asleep because of his intoxication, reproaches the others that wine not only makes them happy but also loosens their tongues. Momus, on the other hand, loves to mock others for their weaknesses. Together with Thalie, Momus and Thespis want to have a little fun and find a weakling to ridicule. Amour protests that a comedy without love cannot possibly work. Together, they decide to stage a spectacle of laughter and ridicule. They only need to find the right subject for their joke.

First Act
Cithéron is tyrannized by the Aquilons, Junon’s companions. Mercure knows the reason: Junon is furious at Jupiter because she knows that he regularly cheats on her. Cithéron suggests that Jupiter should pretend to marry someone, someone so unworthy and ridiculous that Junon will be cured of her jealousy in one fell swoop. The nymph, Platée, seems to him to be an ideal victim of this trick. Platée lives in her own fantasy-full world. She is firmly convinced that all of the all men find her desirable and she believes that Cithéron is secretly in love with her. This he deliberately lets her believe. When Mercure tells Platée that the previously unattainable Jupiter himself is interested in her, she is set ablaze. Platée excitedly calls all of her companions together: Soon she will be at the side of the highest god, which nobody will be able to ignore.

Second Act
Mercure distracts Junon with a ruse. Jupiter presents himself initially to the enchanted Platée as different kinds of animals. Then Jupiter promises to marry her and orders a huge festival to entertain his new bride. La Folie, the embodiment of foolish insanity, appears to everyone’s surprise. She explains how Jupiter’s transformations usually end fatally for mortals and then begins singing a hymn for Platée’s new marriage.

Third Act
Juno receives word of Jupiter’s »marriage« and goes on a rampage. Mercure calms her down: Soon, she would understand everything. Platée and Jupiter’s marriage preparations move forward. Platée becomes impatient, particularly because the god of marriage, Hymen, and the god of love, Amour, have not arrived yet. Finally, she is satisfied with Momus dressed up as Amour and three fake graces. La Folie is going to perform the marriage. In the last second, Junon storms in and confronts Jupiter. But once she sees Platée at his side, she breaks out into roaring laughter: This ridiculous creature is not worth the jealousy. The humiliated Platée is laughed at by everyone. She threatens to take her revenge. 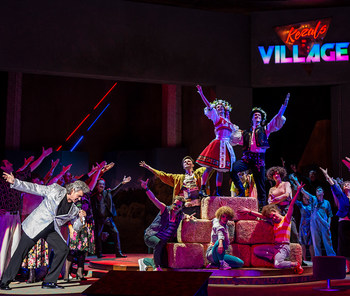 News on the replacement schedule of the Semperoper in times of Corona, current opening hours of the box office and information on ticket returns.