Gaul has been entirely conquered by the Romans. The Gauls would have revolted against their occupiers long ago if it weren’t for the priestess Norma, who, evoking Irminsul, the god of war, continually demands that the uprising be postponed. In fact, Norma wishes to prevent war because she is the secret lover of the Roman proconsul Pollione, to whom she has borne two children. But Pollione’s imminent recall forces action, and when Norma discovers that the Roman has long since fallen in love with the young Druid priestess Adalgisa, she declares war against Rome. Then she reveals her own treachery to the Gauls. But what is Norma’s plan? – First performed in Milan in 1831, »Norma« is the most famous opera by Italian composer Vincenzo Bellini. In his new Dresden production, stage director Peter Konwitschny exposes the political core of this story of a woman who shakes the very foundations of her state.

Act 1
The country of the Gauls is occupied by the Romans. The Gauls under their leader Oroveso would have long since attempted a revolt, but the priestess of Irminsul, Oroveso's daughter Norma, is holding the warriors back in the name of the god. Norma wants to prevent war against the Romans for a very personal reason: she has been in love with the Roman general Pollione for years and has had two children with him. Pollione will be returning to Rome soon and Norma hopes that she can go with him. Little does she suspect that Pollione now loves the priestess Adalgisa. Adalgisa confides to Norma that she is in love with a Roman soldier, and asks Norma to release her from her vow of chastity. Norma, who is reminded of her own situation, reacts sympathetically. But when she asks the Roman's name, Adalgisa tells her it is Pollione, who has just arrived. Norma is furious, and while she is still threatening Pollione with revenge, she is called to the temple. Again, Norma is to decide about war and peace.

Act 2
Norma is determined to kill her children in order to punish Pollione for his unfaithfulness. But then the mother's love wins out over the thirst for revenge, and Norma asks Adalgisa to protect her children and take them to Rome with her. Adalgisa, greatly distressed by Pollione's betrayal of Norma, tries to persuade Pollione to return to Norma. The women affirm their deep friendship. But despite Adalgisa's pleading, Pollione still insists on going to Rome with her instead of with Norma. Bitterly disappointed and prepared to do anything, Norma finally calls for war against the Romans. Pollione, who tried to abduct Adalgisa from the temple, is brought in as a prisoner. Norma insists on speaking to the Roman alone and offers him his freedom if he takes her and the children to Rome. When Pollione again refuses, she threatens him with her own death as well as that of the children and Adalgisa. She summons the Gauls and tells them of a priestess who had a relationship with the Roman. But instead of accusing Adalgisa, she publicly reveals her own guilt. Deeply affected, Pollione asks Norma for forgiveness. But Norma's final concern is for her children, whom she entrusts to her horrified father. Then she leaps into the flames to the curses of the Gauls. 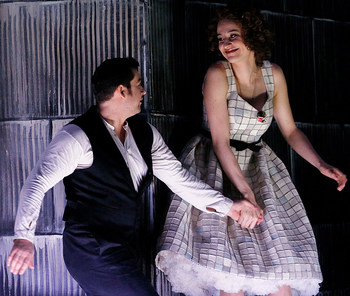 Opera Double Feature: Melodramma in one act / Dramma in one prologue and two acts Performed in Italian with German and English supertitles