Dresden premiere
Co-production with the Teatro Real in Madrid

Mankind is facing its final hour. The end of the world is fast approaching and Nekrotzar, the terrifying Great Macabre, rises from his grave to proclaim the end of time. He takes Piet the Pot, a drunken wine-taster, as his assistant. Together they embark on an apocalyptic ride through Breughelland, a veritable Sodom and Gomorrah of booze and sex, ruled by the infantile prince Go-Go, corrupt ministers and perverted courtiers, inhabited by a frightened and downtrodden people and controlled by the Secret Political Police. The anti-anti-opera »Le Grand Macabre« by the Hungarian composer György Ligeti, which premiered in 1978, is regarded as one of the most effective works of musical theatre of the past decades. In this highly entertaining mix of medieval mystery play, absurd slapstick and black humour, Ligeti tells the story of the end of the world in a virtuoso composition filled with musical quotations and pastiche. Happily, the tale does not conclude with the anticipated apocalypse, which is simply forgotten during a night of general drunkenness.

In an abandoned graveyard in the imaginary Breughelland in the »umpteenth« century, Piet the Pot discovers the lovers Amanda and Amando who are looking for a quiet sleeping place for their rendezvous and meets Nekrotzar, the Grande Macabre, who is posing as death. His plan is to destroy the world at midnight with the help of a comet. Piet becomes his slave on whom Nekrotzar rides into town. Meanwhile, Mescalina is bullying her husband, court astrologer Astradamors, in the worst way possible. He watches the stars, she dreams of a potent lover who promptly appears in the form of Nekrotzar. Nekrotzar bites Mescalina to death, declares the end of the world once more and continues to the palace of prince Go-Go. Here the black and white ministers tyrannise a notoriously infantile prince, Gepopo – the chief of the secret political police – who, warned of the resistant people, announces the arrival of the comet and the Grande Macabre. The situation threatens to escalate – in the end, the people, Piet the Pot, Nekrotzar and Astradamors drink to and celebrate the end. Suddenly, there is a huge explosion, cries of fear and the threatening appearance of the comet; only Nekrotzar is already too drunk to destroy the world. The next morning, Piet the Pot and Astradamors believe they are dead. Prince Go-Go believes he is the only survivor and the seemingly dead Mescalina starts chasing Nekrotzar and gets even with the ministers. Piet and the astrologer notice, »We’re thirsty: Ergo, we’re alive.« Disappointed and embarrassed, the Grande Macabre absconds. Amanda and Amando didn’t notice any of this and there is in the end the insight: »Fear not to die, good people! It will come but not today! Live in happiness until then!« 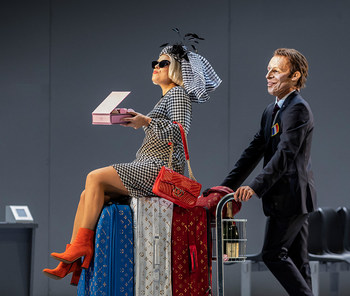