»Così fan tutte« (»All women do it«) – Don Alfonso assures his friends Ferrando and Guglielmo that he can prove to them that their fiancées Dorabella and Fiordiligi will be unfaithful just as soon as they see an opportunity. The young men are so certain of the hearts and loyalty of their lovers that they accept wager. In disguise, they attempt to seduce the young women. As things are about to turn nasty, the couples decide to forgive and forget. Wolfgang Amadeus Mozart and his librettist Lorenzo da Ponte gave the work the subtitle »The School for Lovers« to highlight the enlightening qualities of »Così fan tutte«. Following the premiere in Vienna in 1790, the opera was frequently attacked for its perceived vulgarity. This ambiguity and the wittily precise dissection of the confused hearts of young lovers is also characteristic of the light-footed production by Andreas Kriegenburg, who enthusiastically borrows from the aesthetics of slapstick from the Silent Age of moviemaking.

Act 1
Ferrando and Guglielmo are firmly convinced of the love of their fiancées, Dorabella and Fiordiligi respectively. So convinced that they casually take up the wager of the “Philosopher”, Don Alfonso, that he can prove, within a single day, that their two ladies are unfaithful. The ladies are to be put to the test in strict compliance with his rules and the plot is to be kept in total secrecy.
While the two sisters, Dorabella and Fiordiligi, are waiting for their loved ones, Don Alfonso arrives instead and gives them the dreadful news that their men have to go off to war and depart immediately. The two pairs take their leave of each other.
The two sisters are left inconsolable. Not even their maid, Despina, can cheer them up. She tries to win them over to the idea that the absence of their fiancés  will give them the chance of a dalliance with other men.
Despina is easily persuaded by Don Alfonso to give him active support in his wager with Ferrando and Guglielmo. These two now appear, disguised as “strangers”, and when they make advances to Fiordiligi and Dorabella, each to the other's betrothed, they are briskly repulsed. They pretend to make an attempt on their own lives, in despair at unrequited love – a “doctor” is called, to restore their apparent corpses to life – but this stratagem is equally unsuccessful in winning the two ladies round. Still, there are slight signs that Dorabella and Fiordiligi are interested in the two strangers.

Act 2
Despina puts the case for the strangers to the two sisters. The intrigue starts to show clear signs of success, for after some coy hesitation Dorabella yields to Guglielmo's charms. Dorabella seems to remain steadfast, and even plans to follow her fiancé onto the field of battle. But in the end she too abandons her principles and stops rejecting Ferrando's advances.
Appalled by the discovery that their fiancées are evidently capable of unfaithfulness, Ferrando and Guglielmo go back to Don Alfonso. It is clear that he has won the wager, and he taunts them with his maxim on the fickleness of women: “Così fan tutte” - they're all like that!
Soon Don Alfonso is busy planning a double wedding for the two new pairs of lovers. A “notary” is ordered, and with the ceremony already under way the real fiancés appear, Guglielmo and Ferrando. The time has come for Don Alfonso to reveal all the details of his stratagem.
The original pairs are now reunited. 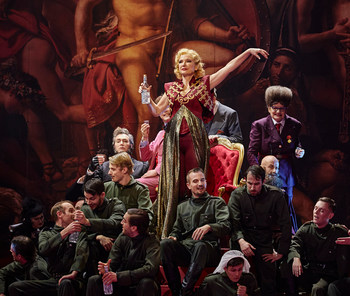