The engagement of Baculus, the elderly village schoolteacher, to his young but cunning ward Gretchen, is to be crowned with a meal of roast venison. But the poaching trip to the count’s park almost costs Baculus his job and his bride. Gretchen’s offer to plead his case in front of the count doesn’t seem appropriate in view of the latter’s notorious lechery. Rescue comes in the form of a student who is willing to visit the count disguised as Baculus’s bride. However, the young »student« is in fact the count’s widowed sister. All this is just the beginning of this comic tale of hidden identities. Under the guise of an amusing farce, Albert Lortzing’s »Wildschütz« from 1842 is actually a caustic and trenchant social satire, the climax of which comes when Baculus agrees to sell his Gretchen to the Baron for 5,000 thalers, singing »And now all at once – a capitalist!« In Jens-Daniel Herzog’s acclaimed production, the on-stage antics are infused with merry wit as well as the requisite seriousness needed to make the nonsense blossom.

Act 1
The engagement festivities of the schoolmaster Baculus and the very young Gretchen is being disturbed by the news that the bridegroom were to be dismissed from his schoolmaster position owing to his poaching. The old suitor had gone poaching on the land of Count von Eberbach, in order to be able, in spite of his shortage of money, to dish up a decent roast venison at the wedding celebration. Since the Count has a weakness for pretty women, Baculus considers to send Gretchen to the castle to intercede for him. However, he immediately scraps the idea, whereupon he incurs the first pre-marital quarrel with his adventurous wife-to-be. Baroness von Freimann, the Count’s sister, remedies the situation. Merrily widowed only recently, she is arriving disguised as a student, as she wants to take an incognito look at Baron Kronthal, who the Count wants to her to get remarried to. On hearing about the schoolmaster’s misfortune, she exchanges one disguise for another: dressed up as Gretchen, she is going to the castle in order to plead for the courting poacher. The Count is arriving at the engagement festivities together with the Baron. He neither wants to get married so sight unseen which is why he has disguised himself as an ordinary stable master. Both men are more than enchanted by the false Gretchen and spontaneously invite the entire company to the Count’s birthday celebration to the castle for the following day. Baculus and the Baroness are proceeding toward the castle well ahead of the others in order to promote their case.

Act 2
The Countess von Eberbach has a distinct passion for the Antiquity as well as a certain infatuation with the ›stable master‹. She is planning a performance in celebration of her spouse’s anniversary. Majordomo Pancratius advises Baculus to win her for his case by citing Sophokles’ quotations. The Count however, intends to cling to the dismissal. The Baroness, disguised as Gretchen but falsely regarded as a student by Baculus, is appearing on the scene. Baron and Count are fierily courting the peasant girl. A thunderstorm is arising and the Count persuades the false Gretchen and Baculus to stay in the castle overnight. The lovelorn rivals are playing a game of billiard in the presence of the meanwhile dozing Baculus and his alleged bride. Their contortions to win her favour, however, are not successful. Suddenly the lights go out. Both now sense their chance to seduce Gretchen after all. But the Baroness delivers her from the danger. The Baron offers Baculus a deal: to sell his bride for 5000 thalers to him. What a tremendous amount of money for a fond but poor schoolmaster.

Act 3
Cheerfully and jollily the Count is starting into his birthday. The village girls are congratulating him which induces him to fervently evince them of his affection. Baculus is bringing him his fiancée which he had sold to him for 5000 thalers the night before. Getting aware of the true bride, the Baron is consternated: this is not his Gretchen! Baculus consoles him by revealing the fact that the other one was actually a student, a man. The Baron demands elucidation and the Baroness reveals herself. Hardly having been left alone by the others, she finds herself again exposed to the Count’s advances until the Countess and the Baron intervene. The true identities and relations are coming to light. The Baron and Baroness come together, the Count abides with the Countess, and Baculus, who in the darkness of night had shot his own donkey instead of a roebuck, stays the bridegroom of his sold bride. 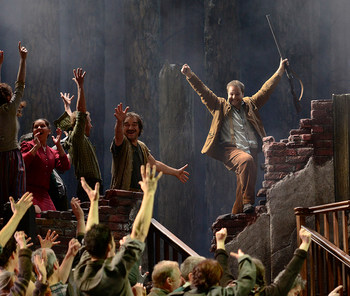 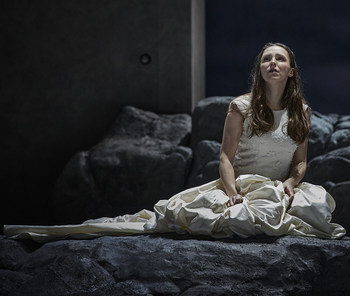