The celebrated singer Tosca lives only for art, until political intrigue suddenly disturbs her life and that of her lover, the painter Cavaradossi: When Cavaradossi hides the political refugee Angelotti, he is targeted by the unscrupulous police chief Scarpia, who has long had his eye on Tosca. To save Cavaradossi, Tosca not only has to betray Angelotti, but also give herself to Scarpia. Premiered in 1900, Puccini’s »Tosca« is practically unique in its close interweaving of political power and personal passions. The German premiere of this opera about love, jealousy, betrayal and tyranny was held in Dresden in 1902. Director Johannes Schaaf has found a timeless narrative style for his staging.

First Act
In the Church, in the Morning
Cesare Angelotti, the former consul of the Roman Republic, has escaped from imprisonment by the new rulers. His first place of refuge is the family chapel of his sister, the Marchesa Attavanti. The Marchesa has hidden clothing there so that he can continue his flight unrecognised. The Sacristan is giving the painter Mario Cavaradossi a meal. Looking at the painting of Mary Magdalene on a fresco, he recognises the Marchesa, whom he has often come across praying in the church.
Cavaradossi compares her inspirational beauty with that of his beloved Tosca, the loveliest singer in Rome. The painter sees it as the inspirational creation of a work of art, but for the Sacristan it is the heretical lustfulness of a Republican, for whom nothing is sacred. When the church grows quiet again, Angelotti ventures out. Cavaradossi recognises him and offers him his support. Tosca demands entry to the church. She is outraged at having to stand in front of a closed door, hearing Cavaradossi’s voice coming from inside. It can mean but one thing: unfaithfulness. Angelotti hides again. Cavaradossi assuages her jealous suspicions that he has a secret lover. They arrange to meet that evening. Cannons fired from the Castel Sant’Angelo signal that the prisoner’s escape has been discovered. Cavaradossi flees with Angelotti to a hiding-place in his villa where he can stay until perhaps managing to escape Rome. The Sacristan returns and reports to the gathering choirboys that the Republicans under Bonaparte have been defeated at the Battle of Marengo. To celebrate the victory, there is to be a Te Deum in the church and a cantata sung by Floria Tosca before the Queen. The Roman police chief, Scarpia, and his men occupy the church. Scarpia elicits evidence from the Sacristan that Angelotti has been at the church and Cavaradossi is involved in his flight. Tosca returns to see Cavaradossi again. With the fan he has found and identified as the property of the Marchesa, Scarpia sends the much-coveted woman into a frenzy of jealousy. Believing she has been cheated by Cavaradossi, she wants to take him to task in his villa. Scarpia sends his agent Spoletta to follow her. During the Te Deum, Scarpia’s desire for Tosca reaches unrestrained heights: he wants to possess Tosca and dispose of Cavaradossi.

Act Two
In the Palazzo, during the Evening
Scarpia’s thoughts are revolving around Tosca and the chance that she will soon surrender to him. Tosca is in the palazzo for the celebrations. He sends for her. Spoletta reports that he has failed to catch Angelotti. Instead, he brings forward Cavaradossi. Scarpia starts to question him, with Tosca heard singing in the background. Cavaradossi denies all the accusations. As the cantata finishes, Tosca follows Scarpia’s order. To her confusion, she finds him with Cavaradossi. Scarpia has him taken into a side room, where he is tortured. Scarpia makes Tosca’s love for and worry about Cavaradossi an instrument of his interrogation. He says that she is to blame for her lover’s suffering. The two stand up to him. Finally, Tosca, under the cries of the tortured man, Tosca reveals the hiding-place. Cavaradossi rejects Tosca. News brought by Sciarrone of a defeat at the hands of Bonaparte gives him new strength. He rebukes Scarpia, who has him taken away immediately for execution. Scarpia uses Cavaradossi’s life to put pressure on Tosca. News comes in that Angelotti has committed suicide. Tosca can no longer escape Scarpia’s desire and does a deal with him: he can have her body for one hour if Cavaradossi is given his freedom, by faking the execution, and they can both have safe conduct to escape. Just as Scarpia believes he has achieved his goal, she stabs him. She takes the letter of safe conduct and conducts the last rites on the dead man before rushing to Cavaradossi’s prison.

Act Three
Platform of the Castel Sant’Angelo, at Dawn
A shepherd boy sings a love song. Cavaradossi begs the guard to let him write Tosca a farewell letter. His memories send him into a delirium of happiness. Tosca has Spoletta take her to Cavaradossi. She tells the man she loves about the letter of safe conduct, the fake shooting which is about to happen, and Scarpia’s death. They dream of a wonderful future together. From a distance Tosca watches the execution. She waits impatiently for the soldiers to leave. Left behind, she rushes over to Cavaradossi. He is dead. She realises that Scarpia has deceived her. Scarpia’s murder has been discovered. Tosca is surrounded. She throws herself off the battlements of the Castel Sant’Angelo. 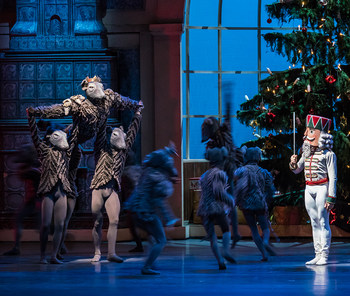