In the fairytale forest, we encounter the familiar figures of the poor siblings who have lost their way as well as the Gingerbread Witch. The story comes to a head in the famous edible house, which is sweet on the outside but a death trap within. In 1893 Engelbert Humperdinck transformed the tale by the Brothers Grimm into a work which is probably the most famous fairy-tale opera in the repertoire. In this production by Katharina Thalbach, the action is enlivened by additional figures from Grimms’ fairy tales to create a brilliant show for the whole family. Little Red Riding Hood, Snow White and the Big Bad Wolf take children and adults on a musical journey that ends with the fall of the Witch’s realm and the victory of good over evil, proclaimed by the gingerbread children: »We’re saved, we’re freed, for ever more«.

Scene 1
Hänsel and Gretel are supposed to be working but they are so hungry. They escape their hunger by dancing and playing. Their mother returns home. Exasperated by the fact that the children have not completed their work, she accidentally knocks over the cooking pot with their last meal onto the floor. She sends the children off to pick berries in the wood. The children’s father has done a good day’s work: he was able to sell a lot and brings plenty of food home. There is great joy. The father learns that the children are picking berries on Ilsenstein. He tells his wife about the wicked witch who lives there. In haste, father and mother go in search of the children.

Scene 2
Hänsel and Gretel are picking berries but eat as many as they pick. They play a game and get lost in the wood. As night falls, they become scared. They say their nightly prayer and fall asleep. Many angels appear.

Scene 3
The children awake to find a tempting world full of sweets, inhabited by a witch who turns out to be very dangerous. She wants to eat first Gretel and then Hänsel. Gretel frees Hänsel. Together they trick the witch and push her into the oven. Other children under the witch’s spell are released by her death. When the mother and father eventually find the children, their joy is great. 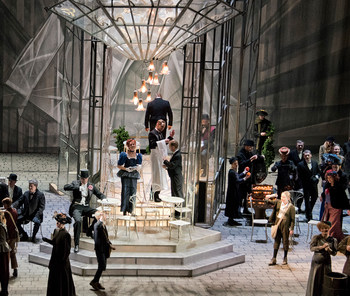