The young geisha Cio-Cio-San, known as »Butterfly«, forms the emotional heart of Giacomo Puccini’s tragedia giapponese, set in Nagasaki at the beginning of the 20th century. The US-American naval lieutenant Pinkerton marries Cio-Cio-San, intending to divorce her shortly after, a fairly common practice in Japan at the time. He rents a suitable cottage for his stay in the city. For Pinkerton the liaison is just an erotic flirtation. Cio-Cio-San, on the other hand, sees the American not merely as a means to escaping poverty, but as the love of her life ... First performed at Milan’s La Scala in 1904, »Madama Butterfly« still touches our hearts today. We are shaken by the realism with which Puccini depicts the cultural misunderstandings and deadly consequences of this tragic love story. Together with star designer Kenzo Takada, Japanese director Amon Miyamoto offers a unique oriental perspective on this Japanese-American liaison.

Act one
Nagasaki in the 1890s. A wedding is to be celebrated in the garden of a hill-side residence with view of the port: the wedding of the American marine officer B. F. Pinkerton and the 15-year-old geisha Cio-Cio-San, daughter of a samurai who has fallen out of favour. The matchmaker, Goro, explains the building design of the new residence to Pinkerton who is not familiar with this. They are joined by the American counsel in Nagasaki, Sharpless. He highlights the cultural differences to the young American and warns him not to take the marriage lightly which can be short-term according to Japanese custom. Finally, Cio-Cio-San and her family, accompanied by several geishas, enter. After the wedding, Cio-Cio-San’s uncle, the priest Bonzo, storms into the garden and denounces the bride for converting to Christianity. Pinkerton asks the angry guests to leave. Suzuki, a friend of many years of Cio-Cio-San, Pinkerton and Cio-Cio-San remain. In the evening mood, both proclaim their love to each other.

Act two
It has been three years since Pinkerton returned to his American homeland with the promise to return when the »robin’s nest« and Cio-Cio-San has been waiting patiently since then. She ignores Suzuki’s interjection that she has never heard of a foreign husband returning to his wife in Japan. Counsel Sharpless brings a letter from Pinkerton; he is to prepare her for the fact that Pinkerton has, meanwhile, married in America but Cio-Cio-Sans’s exuberance prevents him telling her this. Goro joins them and says that Cio-Cio-San should marry the well-off Yamadori as, according to Japanese law, marriage ends in divorce the moment the husband leaves his wife. Cio-Cio-San brusquely rejects Yamadori’s marriage request. She holds on to her belief in Pinkerton’s firm loyalty and American marriage law. Sharpless wants to tell Cio-Cio-San the truth but then she introduces her three-year-old son to him and asks him to tell Pinkerton about him. A canon shot announces the arrival of a ship – the long-awaited M.S. Lincoln with Pinkerton on board. In happy anticipation, Cio-Cio-San and Suzuki adorn the house with flowers. Dressed in her bridal outfit, she waits with Suzuki and her son for Pinkerton’s return. Night slowly falls.


Act three
Cio-Cio-San waited the whole night in vain. She withdraws to her bedroom with her son to sleep. Suzuki finds Sharpless and Pinkerton with his American wife Kate in front of the house. Sharpless asks Suzuki to persuade Cio-Cio-San to entrust Pinkerton’s new wife with her child. Suzuki tells Pinkerton that Cio-Cio-San waited for him for three years upon which he is overcome with guilt and flees. Cio-Cio-San appears from her bedroom and sees Kate. She suddenly grasps the situation. She responds to Kate’s request to give her the child by saying that Pinkerton should return in half an hour to collect their son. After a short conversation with Kate, she agrees to fulfil the wish of handing over her son to him. She asks to be left alone for half an hour and withdraws to her room with the intention to take her own life. She ends her life with a dagger which she kept in memory of her father – the final thing she hears is Pinkerton’s voice calling her name. 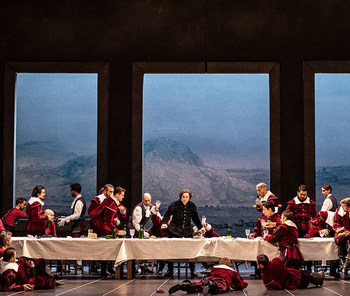