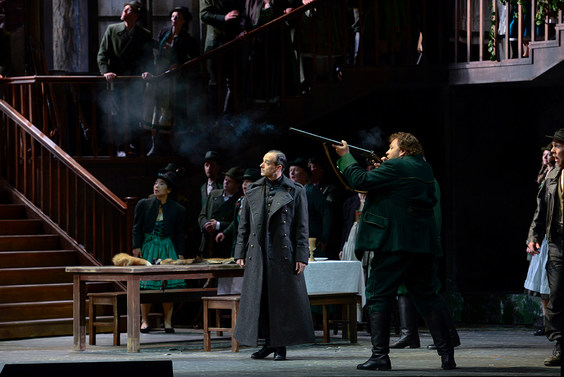 From 18 May 2021, the Historical Archive of the Saxon State Theatres invites visitors to a virtual foray through 200 years of Carl Maria von Weber’s opera. Entitled »Freischütz in Focus«, the online exhibition explores various prominent productions as well as changing interpretations of this masterpiece.
On 18 June 2021, the exact anniversary of the work’s premiere, the Semperoper Dresden will complement this historical survey by streaming its current production of »Der Freischütz«.

Dresden, 12 May 2021. Almost 200 years ago, on 18 June 1821, the opera »Der Freischütz« by Carl Maria von Weber – then kapellmeister and director of the German opera of the Dresdner Hoftheater in Dresden – premiered in Berlin. Only a few months later, on 26 January 1822, audiences at Dresden’s Royal Court Theatre had their first opportunity to enjoy this work, conducted by the composer. After this notable event in the annals of the Saxon State Opera, »Der Freischütz« quickly became a permanent fixture in the Semperoper’s repertoire. Notching up almost 1,500 performances, it is the most frequently performed opera in Dresden.

To celebrate the 200th anniversary of the premiere, the Historical Archive of the Saxon State Theatres is tracing various productions and perceptions of Weber’s opera through a virtual tour of significant locations. In the spirit of the assistant forester Max and his seven magic bullets, from Tuesday, 18 May 2021, onwards the work’s history and relation to the Semperoper will be explored through a series of seven video presentations featuring conversations, exhibits, sound samples and background information. The long list of interviewees contributing to this voyage of discovery on semperoper.de includes the director of the Weber Museum, Dr. Romy Donath, the director of the Kupferstich-Kabinett of Dresden State Art Collections, Dr. Stephanie Buck, horn player and honorary member of the Staatskapelle Dresden, Peter Damm, Staatskapelle musician Harald Heim, former Semperoper company member, the baritone Olaf Bär, the rector of Dresden’s College of Music, Axel Köhler, and the principal conductor of the Staatskapelle Dresden, Christian Thielemann.

To complement the virtual exhibition »Freischütz in Focus«, the Semperoper will stream the Unitel recording of the Dresden premiere of Axel Köhler’s staging of »Der Freischütz« from 2015 on its website from 18 to 20 June 2021. The production features Sara Jakubiak, Christina Landshamer, Andreas Bauer Kanabas, Albert Dohmen, Adrian Eröd, Michael König, Sebastian Wartig and Georg Zeppenfeld as well as the State Opera Chorus. The Staatskapelle Dresden is conducted by Christian Thielemann.

Curated by the head of the Historical Archive, Janine Schütz, together with her assistant Elisa-beth Telle, the project »Freischütz in Focus« is supported by the Carl Maria von Weber Museum as an institution of Dresden City Museums, the Kupferstich-Kabinett of the Dresden State Art Collections, the Dresden College of Music, the parish of Johannes-Kreuz-Lukas Dresden, the German Broadcasting Archive DRA and the Semperoper Edition Profil Günter Hänssler, amongst others.

»Freischütz in Focus« – A virtual tour through 200 years of »Der Freischütz«
From 18 May 2021 at semperoper.de and on all social media channels of the Semperoper Dresden

»Der Freischütz«
A Romantic opera in three acts by Carl Maria von Weber
Libretto by Friedrich Kind, revised dialogue by Werner Hintze
Recording of the premiere of Axel Köhler’s production on 1 May 2015, conducted by Christian Thielemann.
From 18 to 20 June 2021 available for streaming at semperoper.de