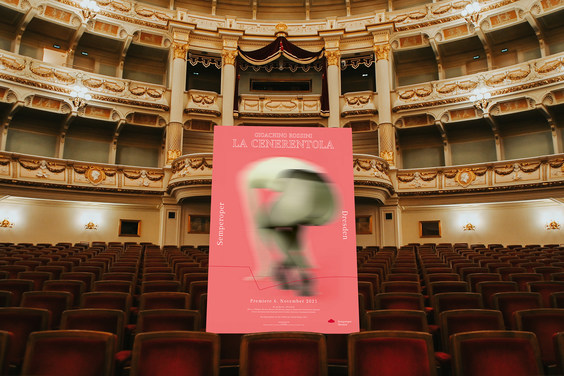 Dresden, 18 October 2021. With new productions of Verdi’s »Don Carlo« and Rossini’s »La Cenerentola«, the Semperoper Dresden continues its extensive series of premieres for the 2021/22 season up to the end of the year.

Following the brilliant »Don Carlo« of 2020 with Anna Netrebko and Yusif Eyvazov, presented as a »Semper Essenz« concert performance to comply with pandemic regulations, opera lovers can now look forward to a fully staged version of Verdi’s classic work on 22 October 2021, featuring a complete cast and the State Opera Chorus. In cooperation with the Salzburg Easter Festival, the Semperoper is presenting the four-act Italian version of the opera from 1884, complemented by a new instrumental introduction by the composer Manfred Trojahn, which outlines the backstory to the drama. A second composition by Trojahn, »Mendelssohn’s Seagulls. A Song Without Words for Solo Cello« from 2012, will be performed as an interlude by Norbert Anger, principal cellist of the Staatskapelle Dresden.

At the heart of Giuseppe Verdi’s »Don Carlo« is the timeless desire for personal and political freedom under an authoritarian regime. Director Vera Nemirova, whose latest work »Carmen« recently celebrated its premiere in Nuremberg, leaves Verdi’s musical plea for freedom of thought in its historical setting of tyrannical power and state religion, with the action taking place amongst giant bookshelves in a monastery library, as visualised by stage designer Heike Scheele. Ivan Repušić will ascend the Staatskapelle rostrum to conduct the Azerbaijani-Russian soprano Dinara Alieva as Elisabetta and the Ukrainian baritone Andrei Bondarenko in his role debut as Marchese de Posa, both appearing for the first time at the Semperoper. Italian tenor Riccardo Massi will make his role debut as Don Carlo while Vitalij Kowaljow will appear as Filippo II. The Ukrainian bass’s last appearance in Dresden was in 2020, when he interpreted the role of Veit Pogner in »Die Meistersinger von Nürnberg«. »Don Carlo« is already the third new production in the 2021/22 programme to be premiered with the help of the Semperoper Foundation. “The members of the Foundation and the Board of Trustees are delighted that after ›Norma‹ and ›A Collection of Short Stories‹, ›Don Carlo‹ is now the third star-studded premiere to be supported by the Semperoper Foundation,« Prof. Dr. Rüdiger Gruber, Chairman of the Foundation, says.

One of today’s most internationally sought-after opera and theatre directors, the Italian artist Damiano Michieletto will make his Semperoper debut on 6 November 2021 with this new production of »La Cenerentola«. The work, based on the tale of Cinderella, was written by Gioachino Rossini at the height of his success in 1817 for the opening of the Roman carnival season. Even though the composer abandoned the story’s magical elements in his socially critical parable of true love and integrity, Michieletto and his stage designer Paolo Fantin bring fresh enchantment to this dramma giocoso with stunning imagery drawn from our contemporary world. This new version of »La Cenerentola«, a co-production with the Théâtre des Champs-Élysées, is the fourth staging of Rossini’s dramma giocoso – one of the composer’s most famous works alongside »Il barbiere di Siviglia/The Barber of Seville« – at the Semperoper since 1817. Alessandro De Marchi will conduct two singers appearing for the first time in Dresden: the Canadian mezzo-soprano Emily D’Angelo and the Moldavian baritone Andrey Zhilikovsky, making his role debut as Dandini. This project was realised in partnership with Sparkassen-Finanzgruppe Sachsen, Ostsächsische Sparkasse Dresden, Sparkassen-Versicherung Sachsen and LBBW.

»Don Carlo«
Opera in four acts by Giuseppe Verdi
Staged by Vera Nemirova and featuring a prologue for orchestra (world premiere) and an interlude for cello solo by Manfred Trojahn
Premiere at 7 p.m. on Friday, 22 October 2021, in the Semperoper Dresden
Further performances on 24 October and 7 November 2021
With Dinara Alieva, Mariya Taniguchi, Andrei Bondarenko, Vitalij Kowaljow, Riccardo Massi, Alexandros Stavrakakis as well as the State Opera Chorus. The Staatskapelle Dresden and principal cellist Norbert Anger will perfom under the baton of Ivan Repušić.
A co-production with the Salzburg Easter Festival
Kindly supported by the Semperoper Foundation