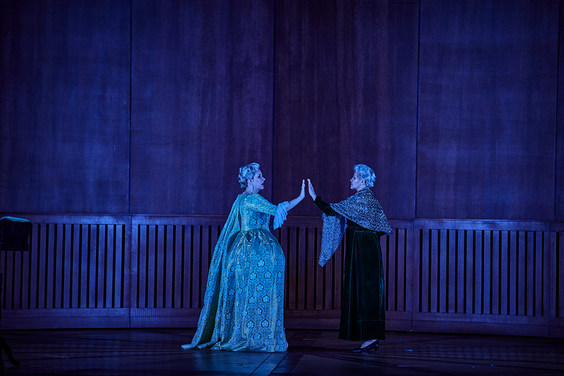 From Saturday, May 22nd, the new star-studded Dresden production of »Capriccio« under the baton of Christian Thielemann will be streamed by the Semperoper.
Jens-Daniel Herzog’s production of Richard Strauss’s final opera takes us on a journey through time, visualised by the stage designs of Mathis Neidhardt.

Dresden, 10 May 2021. By recording its new production of »Capriccio« on the originally scheduled premiere date, the Semperoper Dresden is giving an international audience the opportunity to enjoy the premiere performance of Richard Strauss’s »Conversation Piece for Music« online, despite the current closure of the opera house. From Saturday, 22 May 2021, Jens Daniel Herzog’s production will be available for streaming free of charge at semperoper.de until the end of the 2020/21 season. Following the online broadcast of Mozart’s »The Magic Flute« at Easter, this is now the second new production of the current season to be broadcast via Saxon State Opera’s streaming service. Thanks to the generous assistance of the Semperoper’s health partner, the Medical Laboratory of Eastern Saxony, the recorded production could be staged almost entirely as planned while obeying all relevant measures to protect against Covid-19 infection.

The roster of singers features Camilla Nylund, who last appeared at the Semperoper in 2020 in »Die Meistersinger von Nürnberg«, Christa Mayer, Tuuli Takala, Daniel Behle, Nikolay Borchev, Georg Zeppenfeld and Christoph Pohl. This latest Dresden production is certainly not just a must-see for Strauss aficionados: »It is clear to all of us that this magnificent work can be viewed as Richard Strauss’s final love-letter to the world of opera, a work in which he once again plumbed the depths of his art,« says Christian Thielemann. »But ›Capriccio‹ is so subtly and ingeniously designed that many things are not immediately apparent at first hearing ...« Under the baton of its principal conductor, the Staatskapelle Dresden is well suited to bringing »Capriccio«’s musical subtleties to life due to the orchestra’s long and intimate relationship with Richard Strauss and his work, a tradition which is also enjoyed by the Saxon State Opera.

Since the first performance in Dresden in 1944 during WWII, followed by new productions in 1964 and 1993, Jens-Daniel Herzog’s staging is now Saxon State Opera’s fourth production of »Capriccio«. Together with stage designer Mathis Neidhardt, his close collaborator of many years, Herzog has transposed the seemingly fleet-footed »conversation piece« into multi-dimensional space, thereby enabling smooth transitions between the opera’s three levels of action and time. »Amidst the most dreadful war in history, the elderly Richard Strauss composed his final opera in which various experts debate the primacy of text or music. That can seem like a form of escapism – and it certainly was,« says the stage director and current artistic director of the Nuremberg State Theatre, describing his view of the work and the fact that intellectual freedom and artistic expression must always be protected during dangerous times. Jens-Daniel Herzog has worked closely with the Semperoper for many years, most recently on last season’s production of Richard Wagner’s »Die Meistersinger von Nürnberg«. The current production is the second such collaboration with the Staatskapelle Dresden and Christian Thielemann.

The online broadcast of »Capriccio« is accompanied by other highlights on the Semperoper’s streaming service. In his introduction to the work, the Semperoper’s head dramaturge, Johann Casimir Eule, investigates the questions thrown up by the opera while considering how these are reflected in Jens-Daniel Herzog’s production. Further, he surveys the wide-ranging themes and associations presented by Richard Strauss’s final love-letter to the world of opera. In the series »Talks at the Interval«, Johann Casimir Eule is joined by mezzo-soprano Christa Mayer and bass Georg Zeppenfeld to discuss the significance of word and sound in musical theatre. In this event entitled »Everything must bubble like champagne«, they consider the history of »Capriccio«, the essence of contemporary opera and, furthermore, whether a life without art can be viewed as meaningful. And the »Semper:Thursday« series will also give interesting insights and some musical excerpts from »Capriccio«, namely Georg Zeppenfeld’s interpretation of La Roche’s address and the string sextet from the opera performed by Staatskapelle musicians.

Kindly supported by the Semperoper Foundation