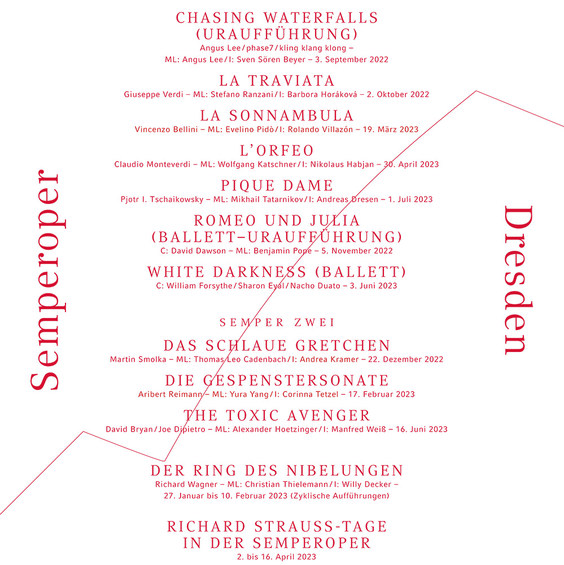 In the upcoming 2022/23 season, the Semperoper Dresden welcomes its international audiences to an assortment of extraordinary premieres, two »Ring cycles« with Christian Thielemann, the »Richard Strauss Days at the Semperoper« as well as the return of many popular repertoire pieces and a diverse range of special events.

Dresden, 2 March 2022. With ten new productions and thirty repertoire works in 365 performances encompassing opera, ballet as well as events of our Junge Szene, the 2022/23 programme offers the expected rich variety of exciting new works – including two world premieres and three Dresden premieres – and popular returning productions. After the global pandemic prevented the realisation of many productions featuring prominent artists originally planned for the past two seasons, the Semperoper is once again moving full steam ahead in Peter Theiler’s fifth season as artistic director. The aim is to ensure regular performances under normal conditions while continuing to follow the creative path he has forged. On the one hand, the 2022/23 programme will further consolidate Dresden’s reputation as a world-class city of culture by presenting brilliant classics of opera and ballet, pioneering works of modern music theatre and a medley of top-class artists. On the other hand, the previously cancelled premieres and repertoire pieces will now be integrated into the upcoming programme.

The 2022/23 season will continue the tradition of past years by featuring contemporary composers as well as major works from the past centuries combined with great directorial talents. Particular highlights in the Semperoper’s programme will be the music of those »local gods« Richard Wagner and Richard Strauss: Wagner’s »Der Ring des Nibelungen« and »Die Meistersinger von Nürnberg« will be performed in January/February 2023 under the baton of Christian Thielemann while at Easter 2023 audiences can enjoy the »Richard Strauss Days at the Semperoper«.

The fifth season of the Semperoper Dresden under the artistic direction of Peter Theiler will once again be characterised by works and productions which, in Theiler’s own words, aim to create »an artistic profile which, over the years, has helped us steer a rich programmatic course in Dresden on the world map of music theatre with many interesting side paths«. The Semperoper is committed to continuing this concept and to integrating into the upcoming programme pieces that were postponed due to the pandemic, so that the 2022/23 season will offer many new premieres as well as rarely heard returning productions.

The 2022/23 season kicks off in great style with a second world premiere under Peter Theiler’s directorship: the opera project »chasing waterfalls«, which is currently still being completed. Together with the artists’ collective phase7 performing.arts Berlin, who devised the piece, the Hong Kong composer Angus Lee and the experimental studio kling klang klong, the Semperoper has developed the opera project »chasing waterfalls«, which combines digitalisation with new forms of creative production. The title of this almost 70-minute opera expresses the attempt to give a concrete shape to something intangible, when the genre of opera is transformed by means of artificial intelligences to create new formats that reflect the omnipresent force of digitalisation. With this world premiere, which is generously supported by the Saxon Semperoper Foundation, the Semperoper is exploring new pathways towards the future worlds of opera. For the first time, compositional, textual and vocal performances will be generated sequentially by means of the »deep learning« processes offered by artificial intelligence. These performances can then be experienced in real time on the Semperoper stage. This opera project, a co-production of the Semperoper with phase 7 performing.arts Berlin and the Hong Kong New Visions Arts Festival, will be presented at a special press conference in Berlin in the spring of 2022. The project partner is the digital service provider T-Systems MMS, headquartered in Dresden.

With the aim of renewing the standard repertoire, the Semperoper is pleased to premiere a new version of »La traviata«. Generously supported by the Semperoper Foundation, the Semperoper is presenting Barbora Horáková’s new staging, which will be the first interpretation of Verdi’s opera in Dresden by a female director. Horáková has already created highly successful productions for Semper Zwei such as »Der goldene Drache« in 2019 and »Die kahle Sängerin« in 2022. Alongside the German Romantic composers long associated with the Semperoper, Wagner and Strauss, this production of »La traviata« sees the Semperoper celebrate another composer close to its heart, the Italian Giuseppe Verdi. Under the baton of Stefano Ranzani, the Romanian soprano Adela Zaharia will make her house debut in the role of Violetta Valéry.

Also supported by the Semperoper Foundation and in co-production with the Théâtre des Champs-Élysées and New York’s Metropolitan Opera, a new production of Bellini’s »La sonnambula« by Rolando Villazón will be premiered under the baton of one of the most distinguished bel canto conductors, Evelino Pidò. And one month later, the curtain rises on Monteverdi’s »L’Orfeo«, staged by the celebrated director, puppeteer and musical whistler, Nikolaus Habjan. Already announced for the 2020/21 season, the original version of this work will now enjoy its Dresden premiere with the lautten compagney under the musical direction of Wolfgang Katschner and with Rolando Villazón in the title role.

The list of opera premieres in the Semperoper and Semper Zwei for 2022/23 is completed by Tchaikovsky’s thematically and musically intense work »Pique Dame« (»Queen of Spades«) in a new production by that master of fine psychological characterisation, the multiple award-winning film and theatre director Andreas Dresen, as well as Aribert Reimann’s chamber opera »Die Gespenstersonate«, staged for its Dresden premiere by Corinna Tetzel. Local audiences will have their first chance to hear another work by Giuseppe Verdi when his »Attila« is performed at the Semperoper in a concert version, featuring Georg Zeppenfeld in the title role and Andrzej Dobber as Ezio.

Our Junge Szene is also represented with two exciting new productions in Semper Zwei: the children’s opera »Das schlaue Gretchen« by Martin Smolka and the rock musical »The Toxic Avenger« by composing duo David Bryan and Joe Dipietro, the latter staged by Manfred Weiß, artistic director of the Semper Zwei venue and director of the Semperoper’s Education Department and Junge Szene programme.

The Semperoper confirms its broad artistic scope with major returning productions such as »Les Huguenots«, »Il viaggio a Reims/The Journey to Reims«, »Platée«, »La bohéme«, »La Cenerentola«, »Der Freischütz«, »Le nozze di Figaro« and »Rigoletto« as well as »Weiße Rose« and »4.48 Psychosis« in Semper Zwei. And, as pointed out by Barbara Klepsch, Saxony’s Minister for Culture and Tourism, in her foreword to the 2022/23 programme booklet, two other highlights will certainly be the return of Wagner’s »Der Ring des Nibelungen« to the stage of the Semperoper and the »Richard Strauss Days at the Semperoper«, which will be held over Easter 2023.

The list of brilliant soloists coming to Dresden to perform the two »Ring« cycles includes Christa Mayer, Tuuli Takala, Anna Gabler, John Lundgren, Andreas Schager, Georg Zeppenfeld, Markus Marquardt and Jürgen Sacher. No doubt the many Wagnerians around the world will be hotly anticipating this operatic event of global significance when the Staatskapelle Dresden once again perform under the baton of their principal conductor Christian Thielemann. He will also conduct the orchestra in the returning production of Wagner’s »Die Meistersinger von Nürnberg« as well as the Strauss operas »Arabella« and »Der Rosenkavalier«, both of which will be performed as part of the »Richard Strauss Days at the Semperoper«. This celebration of the work of the composer so closely associated with the city of Dresden and its opera house will take place over the Easter holidays 2023. The star-studded programme will feature major productions as well as small musical gems; concert events during the »Richard Strauss Days« will be announced later at the Staatskapelle Dresden’s own press conference.

David Dawson, the Semperoper Ballett’s associate choreographer, has taken the timeless story of »Romeo and Juliet« as the basis for his third narrative ballet for the company, a work firmly rooted in the world of classical dance. Benjamin Pope will conduct the Staatskapelle Dresden in their performance of Sergei Prokofiev’s brilliant score, Op. 64, on the premiere evening. Semperoper Ballett will celebrate another premiere with the ballet evening »White Darkness«, which combines three strikingly different choreographies by William Forsythe, Sharon Eyal and Gai Behar as well as Nacho Duato. Ballet director Aaron S. Watkin always aims to present new choreographies and, above all, the work of female choreographers, in each Semperoper season. The ballet premieres and returning repertoire such as »Carmen«, »Peer Gynt« and »La Bayadère« reflect the stylistic diversity of the company as does the programme for the »Palucca Summer Stage«, organised in cooperation with Dresden’s Palucca University of Dance. According to the Semperoper’s artistic director, Peter Theiler: »The pandemic period proved to be a heavy burden for our dancers, as many pieces could not be performed despite lengthy rehearsal periods and great anticipation. Now our company can once again display its entire artistic range and tremendous abilities.«

Committed to upholding its great international reputation, the Semperoper Dresden thus enters the new season with a programme of over 360 performances. The Semperoper can certainly claim to be one of the most artistically productive and lively opera houses in the world with 33 repertoire pieces in opera, music theatre and dance as well as two world premieres amongst the six new opera productions, two ballet premieres and two new productions in our Junge Szene programme. And this list of events does not include the numerous concerts and performances of the Staatskapelle Dresden, which will present its own programme for 2022/23 at a later date.

The Semperoper is delighted and grateful to feature motifs by the extraordinary artist of worldwide renown, Rosemarie Trockel, on its premiere posters for the 2022/23 season. For the series of premiere posters and the cover of the 2022/23 annual programme, the Semperoper was able to draw on a total of eleven motifs by the artist, four of which are from the years 2020 and 2021.

The date for the launch of ticket sales for the 2022/23 season as well as for the purchase of subscriptions and packages will be announced in due course.

The complete press dossier with more information about the programme and the artists of the season 2022/23 at the Semperoper Dresden and some more lists & facts is available on semperoper.de/en/press