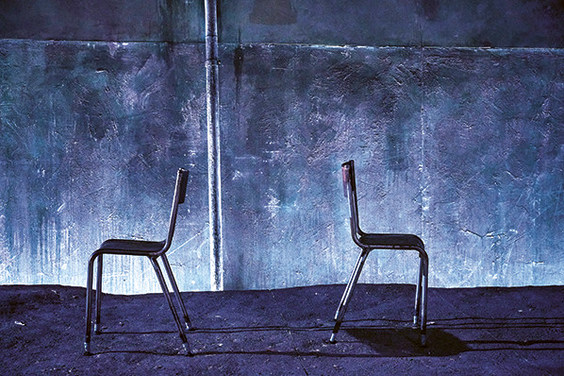 Dresden, 28 February 2022. Previously scheduled for the 2020/21 season and postponed several times, the chamber opera »Weiße Rose« (»White Rose«) will now enjoy its premiere on Friday, 11 March 2022, in the Semper Zwei venue as part of our Junge Szene programme. Interpreting historical events from a contemporary viewpoint, director Stephan Grögler presents this musical-theatrical exploration of the last hours of the Scholl siblings as an urgent warning and reminder to modern society. The score was written by one of Europe’s leading composers of contemporary music, Udo Zimmermann.

Zimmermann, who died in October 2021, created the chamber opera »Weiße Rose« (first performed in Hamburg in 1986) from his own opera »Die weiße Rose«, which premiered in his hometown of Dresden some twenty years before. The production in Semper Zwei is a revised version of the original chamber opera, which was previously performed in Dresden’s Kleines Haus in 1987. The rehearsal for the chamber opera have been conducted by Johannes Wulff-Woesten, working together with the Staatskapelle’s Giuseppe Sinopoli Academy as well as Elisabeth Dopheide and Franz Xaver Schlecht, who will appear as the Scholl siblings. The Swiss director and stage designer Stephan Grögler will make his Dresden debut at the Semperoper with this powerful production of »Weiße Rose«, which is currently the most frequently performed chamber opera in the world.

To accompany the performances of the opera »Weiße Rose« at the Semperoper, there will be a »SemperDialog« organised in cooperation with Wirtschaft für ein weltoffenes Sachsen e.V. and the Gedenkstätte Bautzener Straße. This will take place on the premises of the Gedenkstätte on 17 March 2022, where participants will explore the »Possibilities of Resistance«. Furthermore, introductory talks will be held before each performance as well as a follow-up discussion after the performance on 15 March 2022. Two audio clips providing additional background information – »Werkeinführung« and »Pausengespräch mit Stephan Grögler« – can be streamed via semperoper.de.

With Elisabeth Dopheide and Franz Xaver Schlecht.
Conducted by Johannes Wulff-Woesten.
Featuring members of the Giuseppe Sinopoli Academy of the Staatskapelle Dresden.