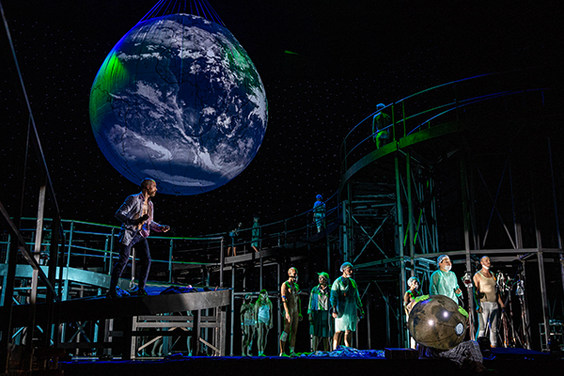 Dresden, 28 October 2019. For the first time since its premiere in Stockholm in 1978, »Le Grand Macabre« by the Austro-Hungarian composer György Ligeti will be performed on Dresden’s opera stage in coproduction with the Teatro Real in Madrid. The premiere will take place on Sunday, 3 November 2019. The staging is by Calixto Bieito, his second production for the Semperoper Dresden after »Moses und Aron« in the 2018/19 season.

Under conductor Omer Meir Wellber, the Staatskapelle Dresden will perform Ligeti’s crazily theatrical Dance of Death, a work that demands a large number of players performing an unusual collection of percussive and keyboard instruments. The cast of soloists include Hila Baggio as Venus/Gepopo, Katerina von Benningsen as Amanda, Markus Marquardt as Nekrotzar, Frode Olsen as Astradamors and Gerhard Siegel as Piet the Pot. Also on stage will be the Sächsischer Staatsopernchor Dresden, musically prepared by Jan Hoffmann.

World theatre of the absurd, full of thrilling provocations, is recognized as one of the great operatic success stories of contemporary music. Ligeti, its outstanding representative amongst the leading composers of the 20th century, entitled his surreal opera-grotesque in two acts an »anti-anti-opera«. Inspired by Peter Breughel’s artistic visions of the end of the world and based on the poetry of his Flemish compatriot Michel de Ghelderode, this complex musical collage, bursting with wordplay, projects the audience’s own primeval fears and passions onto the stage before, finally, the orgiastic horror along with the apocalypse itself simply fizzle out.

In 2010 Calixto Bieito interpreted Ligeti’s universal swan song for Freiburg Opera as a spectacle that did not shy away from crude sex and violent imagery. For Dresden, the celebrated opera director underscores the prophetic music and text of »Le Grand Macabre« with visual clarity in a scenic cosmos created by Rebecca Ringst, supported by video installations from the award-winning Swiss artist Sarah Derendinger.

The two-day symposium »Between Apocalypse and Grotesque« held at Dresden’s Carl Maria von Weber University of Music on 2 & 3 November 2019 will complement the premiere weekend within the framework of Klangnetz.

György Ligeti’s »Le Grand Macabre«
Premiere at 6 pm on Sunday, 3 November 2019, in the Semperoper Dresden.
Further performances on 7, 13, 26 and 28 November 2019.
Introductory talk on the work is offered 45 minutes before each performance.

Please direct your request for press tickets (with details of your editorial assignment, the media outlet and expected publication date) as well as other press enquiries and interview requests to presse@semperoper.de.