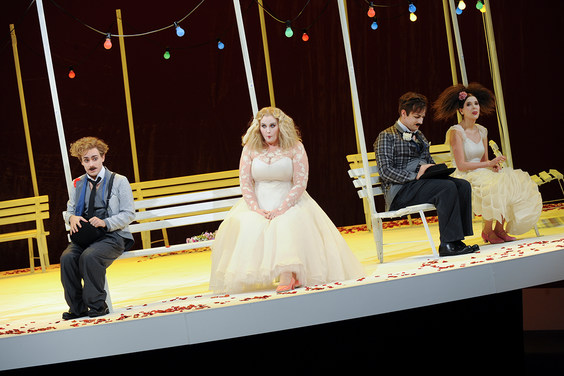 Dresden, 6 January 2020. From January 15th of this year, bass-baritone Lawson Anderson and tenor Joseph Dennis will interpret the roles of Guglielmo and Ferrando from Mozart’s opera »Così fan tutte« for the first time. In these role debuts, the two still new members of the Semperoper ensemble will test the hearts and loyalty of their brides Fiordiligi and Dorabella, performed by Iulia Maria Dan and Jana Kurucová. Ute Selbig and Martin-Jan Nijhof will also take to the stage in this production from 2014 by Andreas Kriegenburg, which features the State Opera Chorus.

The audience of the Semperoper will certainly enjoy the contribution of conductor Georg Fritzsch, born in nearby Meissen, whose impressive career continues to grow. Currently music director of the Kiel Theatre, from the 2020/21 season he is moving to Karlsruhe to take up the post of music director of the Badische Staatskapelle and the Badisches State Theatre. Alongside numerous engagements in the current season, Georg Fritzsch returns to the Staatskapelle Dresden after more than ten years for this popular production of »Così fan tutte«.

Wolfgang Amadeus Mozart’s »Così fan tutte«
Returning at 7 pm on Wednesday, 15 January 2020, in the Semperoper Dresden
Further performances on 22 and 27 January as well as 11, 21 and 24 February 2020
With the kind support of the Semperoper Foundation

Please direct your request for press tickets (with details of your editorial assignment, the media outlet and expected publication date) as well as other press enquiries and interview requests to presse@semperoper.de.