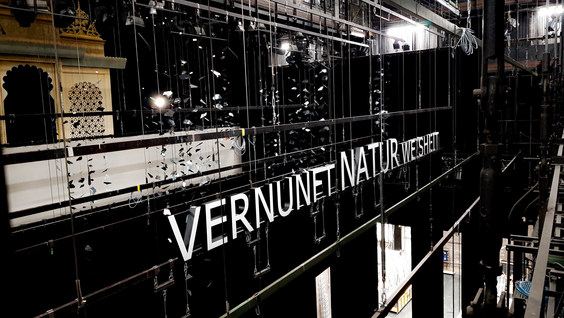 On 1 November 2020, a new production by Josef E. Köpplinger of Mozart’s »The Magic Flute« will celebrate its premiere at the Semperoper. With Omer Meir Wellber ascending the rostrum of the Staatskapelle Dresden and a brilliant cast that includes René Pape as Sarastro and Nikola Hillebrand in her debut as Queen of the Night, Dresden’s music fans can once again enjoy a fantastic evening of opera.

Dresden, 15 October 2020. In its newly revised programme, the Semperoper is delighted to be able to include the new production of Mozart’s »The Magic Flute« announced last spring. As planned, Josef E. Köpplinger, the stage director and head of Munich’s Gärtnerplatztheater, will present his take on Mozart’s timeless and beloved opera on 1 November 2020. Alongside the work’s undoubted spectacle and on-stage action, the philosophical underpinnings and puzzling meaning have provoked diverse interpretations over the years. For Dresden, the Viennese-born Köpplinger approaches Mozart’s hybrid Singspiel as a coming-of-age story. Through the dreamlike, even visionary images of stage designer Walter Vogelweider, Köpplinger (who previously thrilled Semperoper audiences in the 2019/20 season with his exuberant interpretation of Offenbach’s »The Grand Duchess of Gerolstein«) here creates a modern psychological view of the transition from childhood to adulthood, without robbing Mozart’s opera of its fairy-tale colour and magic.

This hotly anticipated Semperoper premiere is the first to be scheduled after the Corona-related disruption to the programme. The audience is guaranteed an evening of top-class singing with a cast featuring Nikola Hillebrand, Christa Mayer, Tuuli Takala, Sebastian Kohlhepp, Markus Marquardt and René Pape.

Dresden’s own René Pape is at home on all the world’s great stages. Enjoying the title of Kammersänger  in Berlin, Bavaria and Austria, he is an ensemble member of Berlin State Opera and has received numerous top awards, including the European Culture Prize, the ECHO Classic Prize, an Opera News Award as well as two Grammys. In 2002 he was named »Vocalist of the Year« by Musical America (the first German singer to win this accolade) and is a »MET Mastersinger«. Acclaimed by critics as possessing the most beautiful bass voice in the world, the opera star’s most recent appearance at the Semperoper was in 2018. Now he has now accepted Peter Theiler’s invitation to interpret the role of Sarastro in the new Dresden production of »The Magic Flute«.

He is joined by the fantastic Nikola Hillebrand in her debut appearance as the Queen of the Night, a role which features Mozart’s most dazzling aria. The Staatskapelle Dresden will perform under the baton of the Semperoper’s Principal Guest Conductor, Omer Meir Wellber, who has already shown his skill in interpreting Mozart/Da Ponte operas on several occasions in Dresden. The conductor’s thoughts on Salzburg’s »uomo universale della musica« are available in literary form (»Die Angst, das Risko und die Liebe«. Ecowin, 2017).

With Josef E. Köpplinger’s new production and other events in the current programme, the Semperoper is now offering its guests full-length works as well as all the services they normally expect in the opera house, which were restricted during the lockdown and under the coronavirus-related hygiene regulations. Tickets for events in November/December have been on sale since 13 October 2020.

Due to the revised seating plan, all tickets purchased before the current booking period are now invalid. Affected ticketholders are requested to contact the Semperoper Visitor Service.

This production is kindly supported by the Semperoper Foundation.

A PDF-version of the press text as well as press photos (from 30 October 2020) are available for download from semperoper.de/en/press.