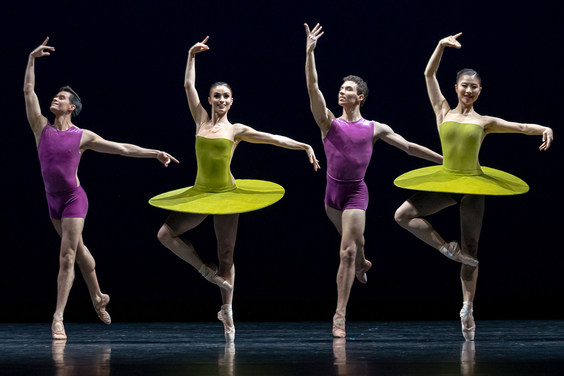 Dresden, 29 September 2021. After the premiere of »A Collection of Short Stories« (originally scheduled for June) had to be postponed due to the pandemic, Semperoper Ballett will now celebrate its first premiere of the 2021/22 season on Friday, 15 October 2021 with this new multi-part ballet evening. As part of the premiere evening, which features excerpts from the company’s classical repertoire as well as contemporary choreographies by David Dawson, William Forsythe and Jorma Elo, audiences can also look forward to the world premiere of Nicholas Palmquist’s dance work (which also gives the evening its title), here performed in front of a live audience at the Semperoper.

The hugely diverse programme in »A Collection of Short Stories« reflects the wide-ranging artistic spectrum of the Dresden company, which Aaron S. Watkin has shaped and directed since 2006, encompassing the classical tradition, neo-classical and contemporary dance. William Forsythe’s »The Vertiginous Thrill of Exactitude« offers dance lovers a choreographic purview of the best of neo-classical ballet; the Associate Choreographer of Semperoper Ballett, David Dawson, whose latest production »Voices« was only just premiered in Berlin, will bring his pas de deux »FAUN(E)« to Dresden, a work inspired by Claude Debussy’s famous composition. A particular highlight will be the solo »Still of King«, created in 2011 by the Finnish choreographer Jorma Elo for the company’s principal Marcelo Gomes.

Classical ballet is represented by excerpts from Marius Petipa’s »Le Corsaire« and »Swan Lake« by Pepita/Lev Ivanov, here in the versions by Aaron S. Watkin; and finally, the young American choreographer Nicholas Palmquist will present his new creation, »A Collection of Short Stories«, based on a piano piece by Alexandra Stréliski. Introductions to the programme are offered 45 minutes before each performance in the opera cellar. In addition, a special introduction is available on semperoper.de to explain the unique aspects of this extraordinary production, which will enrich the repertoire of the Semperoper Ballett from this season onwards.

»A Collection of Short Stories«
Premiere at 7 p.m. on Friday, 15 October 2021.
Further performances on 21, 25 & 30 October as well as 4 November 2021.
A multi-part ballet programme featuring:
»The Vertiginous Thrill of Exactitude« by William Forsythe, »FAUN(E)« by David Dawson, »Still of King« by Jorma Elo, »A Collection of Short Stories« by Nicholas Palmquist (premiere) as well as Aaron S. Watkin’s »White Swan« pas de deux from »Swan Lake« after Lev Ivanov as well as the »Odalisques« pas de trois from »Le Corsaire« after Marius Petipa.
Accompanied by recorded music

This production is generously supported by the Semperoper Foundation and the health partner of Saxon State Theatres, the Medizinisches Labor Ostsachsen.